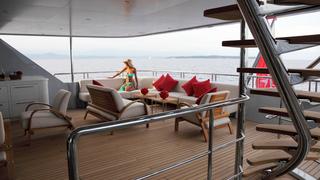 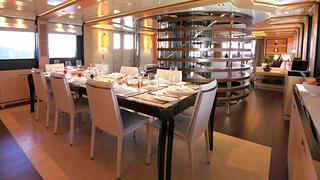 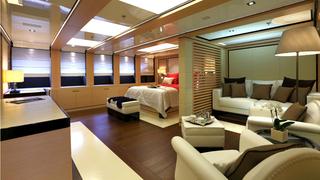 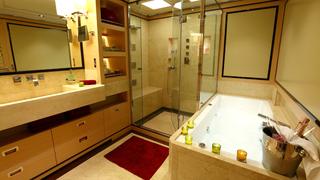 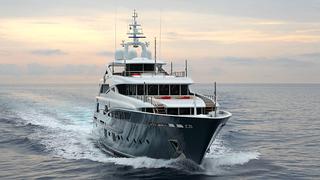 A closer look at 2 Ladies, the superyacht built for sharing

The motor yacht 2 Ladies is the sixth yacht to be constructed entirely by Rossinavi under the yard’s own brand – building all stages of a yacht from the metalwork to the delivery. Rossinavi started out specialising in metal carpentry and supplying steel and aluminium hulls to other yards and this experience, spanning three decades, allowed the yard to move easily from building only hulls to supplying fully fitted yachts. This transition was also possible thanks to strong relationships between the Rossi family and the chain of suppliers that stretch from Viareggio to the nearby provinces of Pisa and Massa.

With the delivery of Numptia, the 70 metre designed by Tommaso Spadolini and winner of one World Superyacht Award and two ShowBoats Design Awards, Rossinavi joined the ranks of large international superyacht builders.

"Certainly Numptia, as well as being a yacht, has served as a “ferry” for the yard, a transit leading to more international visibility and offering a continuity we didn’t previously expect," said Federico Rossi, a second-generation family member and the son of Claudio. This dramatic and rapid success started with the launch in 2008 of the 54 metre superyacht South, designed by engineer Alessandro Cusumano, followed by Numptia and in 2012 with the 45 metre Aslec 4 by Tommaso Spadolini and the 46 metre 2 Ladies by Frank Mulder.

"The FR025 [2 Ladies] project began with a collaboration with Ocean Independence, which brought us two clients in the summer of 2010, interested in buying a 46 metre displacement yacht," recalls Gabriele Zucconi, the yard’s technical director and project manager. "As happens during negotiations, the clients received many other proposals, both from yards in competition as well as from naval architects. They [the clients] had already contacted the Dutch studio Mulder Design through a Croatian yard. Ocean asked if we would be interested in building a 46 metre luxury yacht, but with the Dutch design. We responded positively and were the winning team."

"For the interior design, we suggested Tommaso Spadolini, who had worked on the construction of Aslec 4, and this was greeted with enthusiasm. We had never worked with Frank Mulder but our yard is keen to work with professionals worldwide and happy to establish new working relationships and even to learn something and improve our working methods." Mulder is well-known, particularly for the super-fast yachts Octopussy, Moonraker and The World Is Not Enough. He is now working with his son Bas, who joined the group in 2000.

"After the experience with Numptia, where the owner was very meticulous and wanted to view, check and control everything, these two owners were the opposite," recalls Claudia Rossi, head of marketing, communication and sales. "Each proposal or decision was treated with great simplicity and a quick response: ‘yes’ or ‘no’. They were quicker to choose the samples than we were in writing them down. Although this was their first experience, they had very clear ideas."

With Spadolini and Mulder, the yard studied a layout that gave equal prestige to the owner’s suites. It offered two master cabins on two decks, one cleverly designed on the main deck and one on the upper deck, aft of the bridge, each with direct access to a saloon. The layout, however, meant there was no lounge on the upper deck. The luxury yacht was also sometimes to be used by each owner at different times and the respective spaces should be equal of dimension and quality. The two owners were particularly discreet.

"We have never met two such discreet people as these two Slovak gentlemen," says Rossi. "The most curious thing was that this was their first yacht and that 2 Ladies was only presented to their wives on the day of the baptism and launch. The two ladies who inspired the name of the yacht only saw their yacht for the first time then. The other curious thing was that these are two families who are friends and working partners and who wanted to cruise together."

The project is interesting – a yacht below 500GT with unusual features for a yacht of her size: a sauna and a beach club at the stern next to the garage, a lift that rises up to the flybridge, a gym housed at the bow of the main deck that sports the latest Technogym equipment and a sauna, and a fabulous hydro-massage pool on the flybridge. One important hidden feature is the passage from the crew quarters to the engine room that passes below the cabins on the lower deck: extremely practical and worthy of a larger superyacht. The result is an original vessel that offers greater possibilities than many yachts of her size.

The broker reports that 2 Ladies is enjoying success in the charter market, particularly as she offers two master suites of equal grandeur and dimensions. In addition, the gym area and the sundeck are significant for a 46 metre.

"The construction was supervised by a very competent English surveyor from Ocean Independence who did a great job, very professional and always open to improved solutions," explains Zucconi. "This being the owners’ first experience they were expecting, much like with cars, that there would be no further testing or modifications once the yacht was launched, and that they could set off straight away – and to cross the Atlantic too. But at the end it was almost like that. She was practically like South, our second construction, a yacht that we launched and then forgot about a month later! But this was also possible as the crew, particularly the captain, were present in the yard for the duration of the construction."

The interior décor is contemporary minimalist Italian. One of the most spectacular elements aboard is the grand spiral staircase that gives access to all the decks, with a glass lift in the centre, and fashioned in steel, ebony and travertine marble. The stairs and lift structure had to be situated slightly towards the stern, a prompt to make it truly a decorative feature with design elements on all decks. The steps themselves are travertine marble treated to make the stone less slippery, while the lighting is flush with the structure so the steps are lit without jarring the eye.

The owners wanted to limit the use of carpets and moquette, so the floors are walnut with leather inserts or, in areas of major foot traffic, travertine. The main material is ash wood treated with an open-pore varnish. All the edges of the furnishings are glossy, varnished ebony. The ceilings are fitted with lacquered panels interspersed with lit panels to give the environment uniform lighting. The furnishings are surfaced with waxed leather, matching the tones of the ash, while accessories such as lamps, armchairs, seats and sofas are all by famous Italian design houses, including Minotti, Poltrona Frau, Flos and Armani Casa.

The two full-beam master suites are luxurious, each with king-size bed, spacious adjacent lounge, an office area and a dressing room. The bathrooms are fitted with a hydro-massage tub, and separate shower with jets. Details in exquisite marble give a luxurious yet natural finish. With a palette ranging from black to grey and white, a pleasing richness touches every detail, but the atmosphere retains a sense of tranquility. In short, the décor and the design are rich, modern and delicate and pamper the client rather than overwhelming him.

On the lower deck are two double and two twin cabins, one of which can be transformed into a third double cabin. All have the same quality of finish as the main areas of the yacht, with the floors in walnut with leather inserts, leather panels on the interior walls, brushed ash and glossy varnished ebony as the decorative marquetry.

The saloon on the upper deck has large surrounding windows; it also enjoys natural light from the top of the staircase that opens out to the sundeck above. The area is like a penthouse, with multi-level open spaces.

Entertainment was one of the main features in the design of 2 Ladies. Advanced domotics with a Kaleidoscape system for TV on-demand are installed, as well as the best of the multimedia servers, allowing you to memorise and access A/V files from one high-performance system. A system by Lutron, a leader in domotic control, and innovative Apple devices complete the multimedia accessory package for the yacht.

Particular attention was paid to the finish and the selection of materials in the technical areas. In the navigation station, just aft of the captain’s cabin, the chart area is of etched glass in the same colour as the leather that surrounds the instruments. In the pantry and galley work surfaces are Kernite, a synthetic product that looks like stone but is stronger and much lighter.

"A special, positive collaboration between Mulder Design and Design Studio Spadolini led to the creation of a yacht with a clear stamp of the owners’ personality," says Spadolini. "With this, their first yacht, they already possess a true superyacht for all seasons that will still be up to date in the years to come.

"I have passed on my compliments to Mulder for such brilliant solutions on a yacht that is less than 500GT. The owner of Numptia even commented that 2 Ladies is like a 70 metre yacht – just made a little smaller."