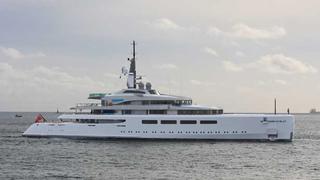 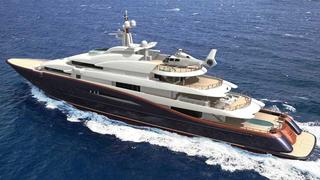 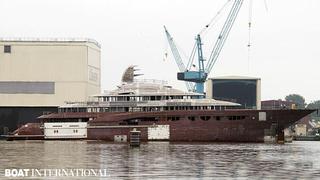 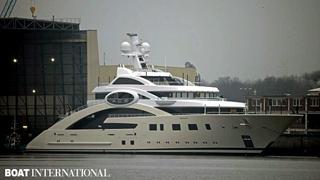 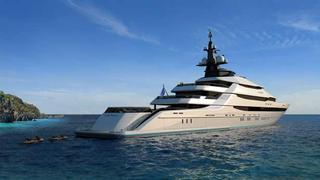 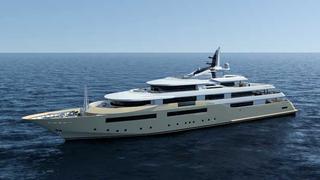 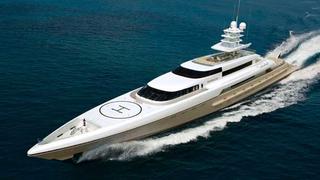 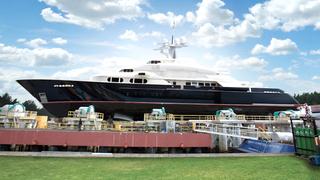 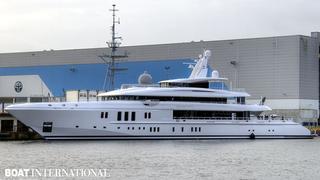 The round-ups and reviews of 2011 are all in, and the 200 largest yachts in the world have taken their places in the Top 100 list (see the February 2012 issue of Boat International and The Register on boatinternational.com), but what about the yachts waiting in the wings to join the ranks? Here are the 14 yachts we expect to see delivered this year and becoming members of that elite line-up.

Launched in November 2011 from Abu Dhabi Mar, the 141 metre Yas, previously Swift 141, is awaiting delivery in Abu Dhabi. She is the first yacht from ADM Shipyards and is based on the hull of a former Dutch-built navy frigate. The new superstructure is the largest ever built in composite. The designer is Jacques Pierrejean.

Vava II, the largest private motor yacht built in the UK, was christened at Devonport Yachts in September 2011. Previously known as Project 55, the 96 metre yacht is undergoing sea trials in readiness for her delivery in February 2012. She was styled by Redman Whiteley Dixon with interiors by Rémi Tessier and features a fold-down beach club.

The 88.5 metre explorer-style Y707 has been under construction at Oceanco since July 2008 and is undergoing final completion work. Interior design is by Australian Sam Sorgiovanni and she features a helipad on the top deck.

Being built by Lürssen to a design by Nuvolari & Lenard, Bellissimo will accommodate 12 guests in six staterooms and is scheduled to be launched in 2012.

The 86.5 metre superyacht Ace, previously known as Project Rocky, was recently launched from Lürssen’s Rendsburg yard. Designed by Andrew Winch Designs both inside and out, this yacht has an unusual profile with large side arches surmounted by oval side balconies. Her ‘classic’ interior accommodates 12 guests in six cabins over five decks. Ace will be delivered after the usual sea trials.

Oceanco’s 85.6 metre_ Y708_ is in its finishing stages. The builder colllaborated with Zwijnenburg and Aluship Technology for the hull and superstructure. Her smooth lines are by Igor Lobanov.

The 80 metre 129 is under construction at CRN and will be the biggest yacht built at the Ancona yard. She has a steel hull with an aluminium superstructure and sleeps 12 guests in six suites. CRN looked after naval architecture, while Studio Zuccon International Project designed the exterior. The owner will be able to access his private deck from the helipad, and the six guest suites have private balconies.

This will be the fifth hull of the series to be launched – a sister ship to C2, Eminence, Amaryllis and Titan, all of which have been designed by Reymond Langton.

No details have been disclosed about this project.

The third and most advanced vessel in its Silver Series, 77 metre Smeralda is nearing completion at Hanseatic Marine in Australia, with delivery scheduled for spring 2012. Equipped with powerful twin MTU main engines, her top speed is anticipated to reach close to 30 knots, while retaining the extraordinary fuel efficient credentials which are intrinsic to the Silver Series concept. Smeralda is being built to Lloyd’s class and will be fully MCA compliant. Smeralda is listed for sale with Burgess.

This will be the first superyacht by HDW since being renamed ADM Kiel.

This is an explorer yacht designed by Tim Heywood, but no other details are known at present.

New Horizon was launched by Trinity Yachts in November 2011 and is awaiting delivery in spring 2012. The 73.8 metre four-deck motor yacht was built to ABS class in steel and aluminium. She was the largest yacht launched in the US last year and accommodates 12 guests in six suites.

Previously known as hull number 783, the 73.55 metre Graffiti is a sister ship of Mogambo and was launched in November by Nobiskrug. Both have exterior and interior design by Reymond Langton but Graffiti can be distinguished by her entirely white hull. Few specifications are known, but her layout is believed to accommodate 12 guests in a master and five double cabins. She is due for delivery in early 2012.