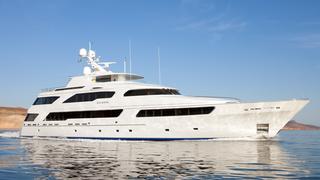 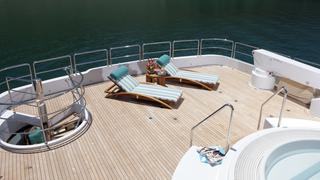 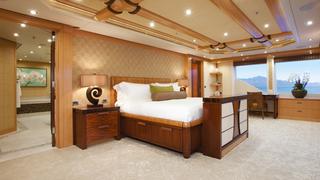 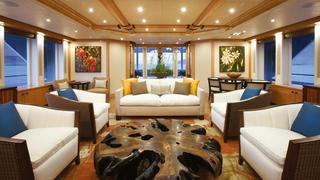 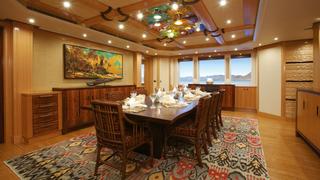 Like many new builds, a love for the sea was the foundation of Arianna, the new 50 metre motor yacht from Delta. But unlike other yachts, a baby girl was the one who set the build in motion; it was the birth of the owner’s daughter that moved him to take the plunge into yacht ownership.

‘I wanted to share the experience of exploring the world on the sea with my daughter and have her grow up knowing the ocean,’ he says.

A particular fan of fishing, the owner had chartered yachts before but, as he says, ‘One thing that always stood out for me was that every yacht felt like a hotel at sea and not a single one had the warmth of a home at sea. They never felt like a place you could really settle into. I would always start to miss the comfort of my own home after 15 to 20 days. I wanted [my daughter] and my wife to feel at home no matter how many miles away from home we were or for how long.’

As family was the impetus for the build, choosing a family owned shipyard was, in his words, ‘a no brainer’. He had seen other Delta yachts and appreciated their craftsmanship, engineering and joinery work. He also felt that at their first meeting, yard owner Jack Jones immediately understood the importance of creating the right feeling for his family.

The owner wanted Arianna to be something of a bubble, independent of her surroundings. He also knew from past charter experience that he wanted the features and amenities common to a yacht of more than 60 metres, yet on a 50 metre hull. For both reasons, interior volume was an important consideration.

Delta designed and engineered the build in-house in composite, creating a 50 metre that boasts as much interior volume as possible for her length. This full-displacement yacht has more than 820 gross tonnes of volume and more than 700 square metres of living space. Adding to her role as a bubble from which to explore the world, Arianna carries a hefty 82,900 litres of fuel. With her twin Caterpillar 3512B engines cruising at 13 knots, she has a range of more than 5,000 nautical miles, her seaworthy hull aided by Quantum Zero Speed stabilisers. Delta also included large walk-in refrigerators and freezers on the main deck for long-term provisioning.

Bringing the main and bridge decks all the way aft to maximise volume has the added benefit of stretching the top deck, giving it a huge amount of space. The sundeck features a day-head, a spa pool, chaise-longues, a dining table and a large island-style bar shaded by a lightweight carbon-fibre bimini top. A lift reaches this deck from any of the three decks below.

The focus on family is apparent in the interior layout. Instead of forward on the main deck, the master is set within an upper-deck apartment aft of the bridge that also includes a twin suite suitable for children and a private lounge joining the two suites. The master suite overlooks the upper aft deck, which can be closed off from the decks above and below by locking the glass-enclosed spiral staircase.

This private deck is a prime spot on board for the owner. ‘I like that I can host my extended family and friends in a more intimate setting than the sundeck or the main deck,’ he says. Another favourite place is his office, which, set on the main deck, is separate from his sleeping quarters. ‘I work in four time zones and having state-of-the-art office space is critical no matter where we go,’ he says. ‘My wife, on the other hand, would tell you that the gym is the best spot on board Arianna by far. For me, it’s still the room I’m least acquainted with.’

While keeping the owner’s vision of home, Delta’s team also created the ambiance of a retreat or a casual escape. Under the guidance of the project’s lead designer Christian Oliver, Arianna’s interior décor is almost whimsical in her details, with an overall Polynesian influence.

Despite the high level of design detail that went into Arianna, she came in on time and on budget. The project went exactly as planned for this first-time owner, who says his only challenge was managing his own anticipation during the build. He had SG Private Wealth Advisors as his build representative and credits it as well as the family-owned yard for understanding and adhering to his vision.

The owner took delivery in July, three years to the month after his initial meeting with Jack Jones. Fulfilling his wish to explore the world with his family, he headed off for a month-long vacation with his wife and daughter in the blissfully uncrowded off-season Caribbean. The captain Mark Lacey reports that he’s been very impressed with her passage-making.

‘We pretty much maintain a good high 14 to low 15 knots in most conditions, even in quite large seas on the nose. She just seems to have a really good balance of size, power and hull form,’ says Lacey. ‘The other thing I’ve really noticed is that she is exceptionally quiet under way. All manufacturers are good at insulating the engine room, but, in reality, most passage noise stems from a creaky interior. On Arianna the interior is almost completely silent and by far the best I have ever experienced.’

The owner acknowledges that, ‘It is difficult to take an owner’s vision, which includes all concepts, feelings and intangible ideas, and turn it into a successful physical creation.

‘Walking through the final product of Arianna for the first time was a very emotional experience for me just for that reason: Delta brought it home with spotless and perfect execution.’