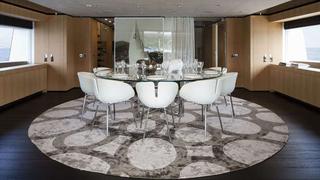 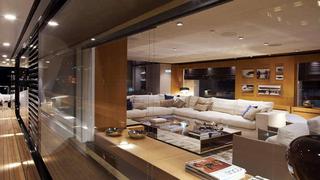 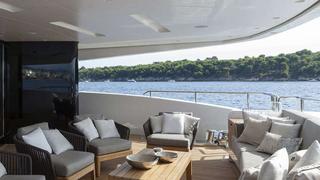 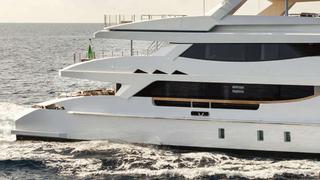 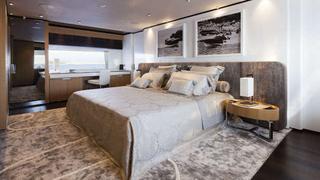 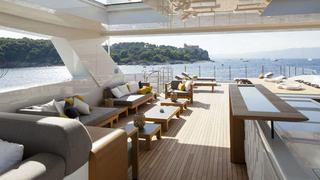 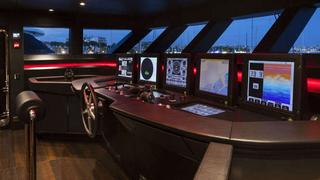 In 2012, the Baglietto yard faced extinction until entrepreneur Beniamino Gavio stepped in with a €20 million plan of investment for the marque’s yard in La Spezia. Now, in 2014, the first of the new breed of displacement motor yacht has emerged, and it’s a stunner – and a fitting marker for the yard’s 160th year.

Sleek good looks, a modern line to her exterior and a contemporary take on her interior make this 46 metre a superyacht to take note of. She carries a family resemblance to Baglietto launches of yore, yet is distinctly new – both elements thanks largely to the work of superyacht designer Francesco Paszkowski, whose design link with Baglietto stretches all the way back to 1991. A widebody design forward gives a generous master suite, while spaces have been reconfigured for modern living – the tenders and toys are carried on the foredeck allowing for a large beach club in the stern, and the upper saloon is a dedicated formal dining area, leaving the saloon on the main deck clearly defined as a relaxation zone.

“The client is the centre of our business, not a hull number,” says Gavio, and although this particular 46 metre is a spec build, the yard has gone out of its way to show what it is capable of in terms of both design and finish. Further, she is a cleverly tweaked version of a displacement design that was originally conceived seven years ago, under the old management of the yard. “The big challenge was to design a new yet recognisable Baglietto,” says Paszkowski. “For the 46 metre, we looked for a style that could be appreciated with minimal revisions. There were some things we had to do, for example a beach club wasn’t even thought of in 2008. Today you must have one, so we had to move tender stowage to the foredeck and change the layout of the flybridge.”

With a steel hull and aluminium superstructure, the Baglietto 46 is in many ways a conventional build. Structurally she has been well conceived, with self-supporting deck overhangs meaning the aft deck areas are blissfully free of pillars or other vertical obstructions. The widebody design forward means that 498 gross tons of volume has been squeezed into a lithe outer body.

While several design cues remain from Baglietto's past – for example, the main deck windows in the hull forward and the general aspect of her profile – new elements have been added to take the design into the future. Forward raked bridge windows and a new transom design clearly differentiate her from her older sisters. “The yacht features a balance of soft and angular lines,” Paszkowski enthuses. “Just look at the triangular cutaways in the bulwark below the upper deck, sliding like the fins of a shark, or the chamfering of her aft end. She also features more round shapes as in the dropped bulwarks of the upper deck.”

Paszkowski worked with Margherita Casprini to refine the interior style, which as a spec build had to appeal to the widest possible range of clients while also demonstrating the quality that the yard is able to deliver. The result combines subtle luxury with a clean palette and a welcome lack of fuss. “The decoration is quite neutral,” says Paszkowski, “yet it includes many details to ensure a luxurious ambiance with real character and a lot of Italian custom furniture.” White and dark brown leather with visible stitches, glossy white lacquered panels, mirrors – which enhance the feeling of height inside – and fabric ceiling panels provide a sober yet contemporary feel. While the layout is fairly conventional – generous, full beam master forward on the main deck, four guest cabins below – there has been a reimagining of how to use each space that has resulted in a formal dining room on the upper deck and a dedicated saloon on the main deck. In addition, steps from the main saloon lead to the 25 square metre beach club, which can also take a sauna/steam room.

A large aft main deck, generous upper aft deck with large alfresco dining table, and an expansive sundeck partially shaded by the hardtop means there is ample outdoor space for socialising or moments of quiet privacy. The beach club in the stern means the foredeck is used for tender stowage, but the outdoor living is no less impressive for that. The sundeck does not have a spa pool, although the plumbing was installed in case her future owner wants to put one up there.

Running with two Caterpillar 3512B engines, expected top speed is 17.5 knots with a cruise speed of 15 knots and a projected transatlantic range of 4,500nm at 12 knots. The TEAMItalia five-screen bridge is all business, and those forward raked bridge windows mean reflections are kept to a minimum at night.