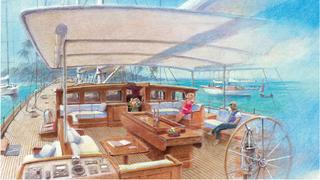 Here too we have another illustration of how many people had to work closely together to research the solution, including the owner, designers, sailmakers and equipment suppliers.

Eventually, a fully battened sail was developed that furls into a boom with a large roach. To handle the huge batten loads involved, Schaefer Marine designed a special hinged track system on the back of the mast. The entire track rotates and has an outer groove for the batton receptacle and inner groove for the bulk load.

After some fine tuning on the owner’s current yacht the system works well, and now these experiences are set to be translated on to a much bigger scale.

Athos is designed with captive winches so that she can be sailed pushbutton. Because of the yacht’s massive hydraulic capacity, all the winches and other sailing related equipment can be used simultaneously.

‘The most incredible shapes of blocks and stainless steel brackets were required in order to get everything organised,’ says Zijlmans. ‘A load sensor system has also been developed to measure tension in critical lines, with monitors installed and the signals from the rails collated and displayed on screens in the engine room, deckhouse and crew areas.’

Athos has many customised innovations, each of which sound relatively simple but required a separate study

Once completed there will be many more high-tech features to be admired on Athos from the moment one steps aboard, which can be from either side of the yacht via boarding ladders that retract into the platforms or using a bespoke stern platform. In the cooling arena alone, Athos has many customised innovations, each of which sound relatively simple but required a separate study in their own right.

Her on-deck dashboards, for example, are not linked into the overall air-conditioning as normal but cooled locally by ventilators and cooling elements that have been shaped to fit within the exact space and equipment.

A similarly compact and lightweight solution was also developed for the audio-visual stacking area. And the engine room has a very special system that lowers the temperature using outside cooling water and blowers.

Perhaps the greatest testimony to the achievement is that all the systems and solutions detailed here have been completed without impinging on the interior volume of the yacht’s living areas.