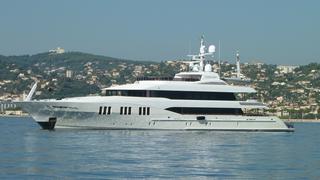 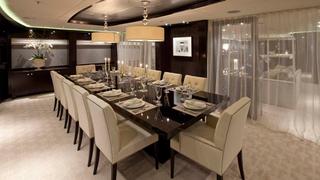 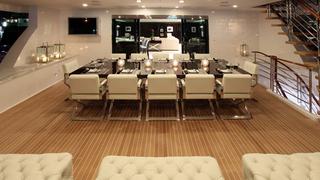 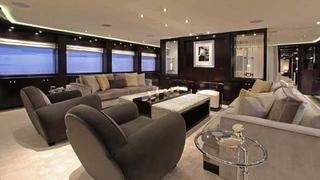 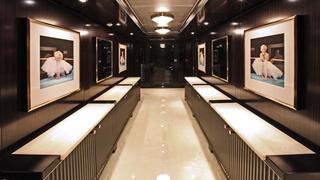 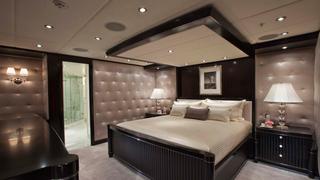 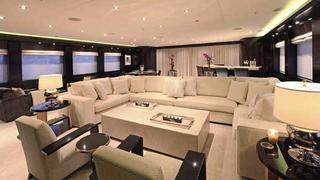 She is as glamorous as a movie star. Even her exterior styling is unique – a departure from the typical Trinity look, her flat sheer allowing for clean, leading lines that give her a sleek, almost stealthy, appearance. Her white superstructure perches prettily atop a pearl-white, semi-displacement hull. Vertical pilothouse windows, gleaming stainless stanchions and teak-capped rails further add to what could be described as a ‘northern European’ style. But this 58.22 metre yacht is an all-American girl: American owned, American designed and American built.

This Trinity is the owner’s third and largest yacht to carry the Carpe Diem moniker, but she is his first fully custom build. His first yacht was a 36.5 metre Palmer Johnson and several years later, in the market for a larger yacht, he acquired a 45 metre Trinity. When this active owner was ready to undertake an even larger project, he assembled a dream team that included designer Carol Williamson, project manager Kevin Greene of OYS and Trinity Yachts to collaborate on his first custom build.

Aboard, art deco influences begin as early as the transom and yet, there is not a single guest area that does not look modern or invite lounging in true superstar style. The owner himself is a connoisseur of the 1920s Parisian Art Deco movement, and perhaps that is the difference – this boat is obviously fitted out for fun and functionality, not just fashion.

The expansive sun deck two levels above is home to about a third of the boat’s nearly 150 exterior cushions. Here the materials are vibrant - crocodile leathers with grey velvets and bold flashes of orchid purple against neutrals. Beautiful, broad sunpads and luxuriously deep, built-in sofas make up the seating areas on this deck - the sunpads encasing a very large, 12-person spa tub with mosaic stone inlay and teak surround.

The owner’s desire for comfortable relaxation areas did not end with the exterior spaces, however, and it is within her interior that Carpe Diem really shines.

Once inside the main saloon, warm platinum, silvery greys, creams and the dark accents of the macassar walls and ceilings with ebonised cherry trim combine with sumptuous materials to create a high-contrast, textural treat for the senses. From the saloon bar topped with solid white onyx flown in from Italy to the varied and sophisticated lighting and furniture shapes, the boat instantly conveys a very modern feel with undertones of European deco and an interesting play of light and shadow. However, it is the owner’s fabulous collection of vintage black and white photos that completes the glamorous ambiance.

A grand, full-beam foyer forward of the dining saloon doubles as a gallery space, where the only colour photographs – a series on Marilyn Monroe by photographer Milton Greene – are on display. Mirrors centred in the space facing each other result in an intentional infinity reflection appearance. This space also has been practically designed to house the bulk of the yacht’s china and serving ware, just one of the many implementations aboard that allow the crew to attend to the owners or charter guests with ease.

Taking advantage of the additional beam afforded on this yacht, the owner specified a unique layout for the main deck master. Here the bed is situated athwartship on the port side, freeing up space for a designated lounge area to starboard. The master also features completely separate his-and-hers en suites featuring light crystal onyx in his and white Calcutta marble in hers sourced by Jeff Homchick and fabricated and installed by Pacific Coast Marble and Granite of Seattle, Washington.

But nowhere on board is the 10.2 metre beam more appreciated and noticeable than in the upper saloon. This expansive area boasts amazing water views in a light and open space where once again, rich, warm macassar wall panels contrast creamy textural fabrics and clean furniture lines

Fully classed and intended for charter, Carpe Diem includes four large, king-size cabins with marble-clad en suites belowdecks. A fifth cabin can serve as a twin with a Pullman berth or can be arranged as a sitting area when joined with the cabin opposite to become a suite.

Crew ingress and egress is seamless and unobtrusive, even without the walkaround side decks on the upper level. The spacious galley has been well thought out for charter prep and includes large walk-in refrigerators and freezers. The owner specified a seating area as he likes to take his morning coffee with the crew – and the galley itself has been outfitted with statuary marble and Mozambique wood of the highest standards. Of note is the dumbwaiter and the dedicated interior stairway between the galley and the prep pantry one level above, allowing the crew easy access between both decks.

Carpe Diem is an exquisite American yacht that is likely to set the tone for future builds. She certainly will see plenty of action on the charter market – that is, when her owner isn’t enjoying a cruise aboard himself.