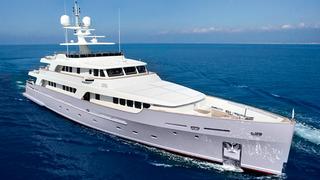 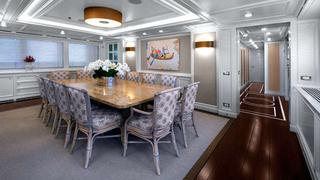 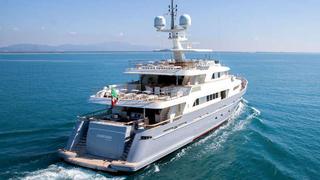 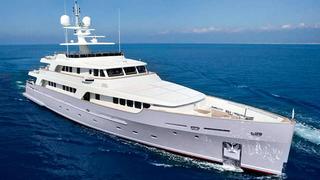 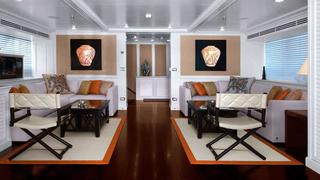 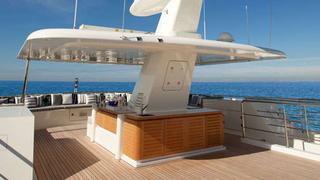 Ask many superyacht owners to describe the roots of their passion and they’ll describe the glamour of the 1960s French Riviera, when yachts were more graceful than the film stars and princesses they carried. Still, few such owners choose to sacrifice the comforts of modern design and technology in their motor yachts to return to that style. The Vintage series by Italian yacht builder Codecasa was designed to allow owners to enjoy both classic beauty of a bygone era and the modern comforts of today. The 42 metre superyacht, now named Libra, was completed in July 2013 and is the second hull in the series – and the best example of this fusion.

The interior design, by the yard’s architects with designers Franco and Anna Maria Della Role, is a perfect continuation of an exterior design that combines light modernity with a classic spirit – no easy balancing act in either case. The décor is residential and relaxing, with ivory finishes to the wood used in furniture and bulkheads, contrasting with dark mahogany flooring. The light style has classical cues, such as Louvre cabinets, and contrasts the uncompromisingly modern, all-white interiors of the first Codecasa Vintage. Libra's interior flows beautifully from a single ethos for the yacht’s overall design.

‘The Vintage line has been created to revive a classical style with timeless charm, to reconcile people who feel nostalgic for the past with people who believe that there can be no modernity without break with everything that existed before,’ says yard owner Fulvio Codecasa, of the inspiration for the Vintage series. Libra follows the first Vintage, 42m, Hull F73, launched in 2011, now named Magari, which made her debut at the 2011 Monaco Yacht Show, while a Vintage 50 metre and a Vintage 43 metre are due to launch in 2015. All have been built on-spec and Codecasa believes this way of working is particularly suited to the Vintage series, whose ‘style and sobriety’ have wide appeal.

The F75, like her sisters, was built of steel and aluminium at Codecasa’s facilities in Pisa and Viareggio, and is both MCA and Lloyd’s Registered. ‘The aspect that most fills us with pride, both from the technical point of view and the architectural one, is that we have been able to realise a very large yacht remaining just below the Gross Tonnage of 500 tonnes,’ says Codecasa.

The exterior design (penned in-house) of the 42 metre _Libra _is balanced and elegant, with what Codecasa, calls a ‘full appearance, which is compact, solid, accentuated by the “rhythm” of the shape of the windows’. A vertical hull adds to a feeling of substance and formality, while the grey hull is stylish and and sober. The F75 does not look like a replica of a classic yacht, but it embodies the spirit of such boats.

The major difference between the F75 and Magari is on the upper deck, where a formal dining saloon has been transformed into a snug upper saloon with warm Asia accents in colours and ornaments, while there is an al fresco dining table on the aft deck – a layout more suited to modern superyacht use. The main saloon of _Libra _below offers a formal element in the communal spaces, with a dining saloon forward.

But the overall feeling here too is comfortable and residential, with partial separation between the seating and dining areas. There are cream armchairs, brown leather sofas, bookshelves and trunk-style side tables – furniture that looks as well as feels comfortable. This continues forward in the owner’s cabin, featuring twin en suites joined by a shower, and in the guest cabins on the lower deck amidships. The galley is positioned forward of the dining saloon, while a separate pantry serves the upper saloon. Crew and captain sleep forward on the lower deck and there is accommodation for eight – although the boat has been operating comfortably with seven.

The sun deck is partially covered and features a wet bar, fridge and icemaker, -making it a private and independent space in which to relax. Up here, where the F75 has large sunpads, the in-build 43 will feature a spa pool. Down on the main deck there’s a large covered aft deck set up for coffees and daytime socialising, while the upper deck features an informal dining table in the shade and sunbathing aft. A garage for underwater and sports equipment plus the main tender lies between the engine room of _Libra _and the swimming platform.