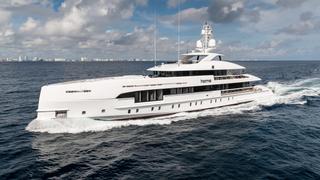 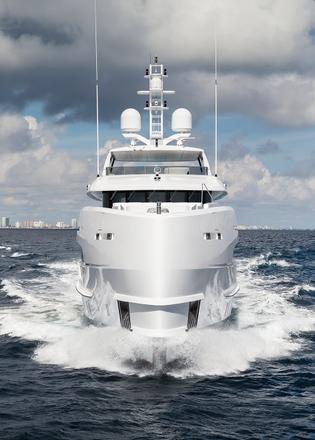 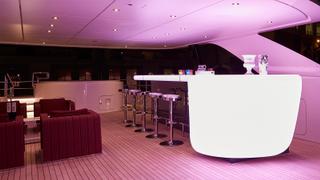 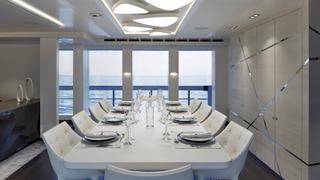 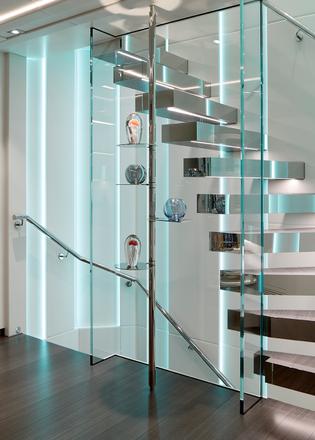 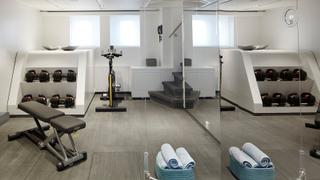 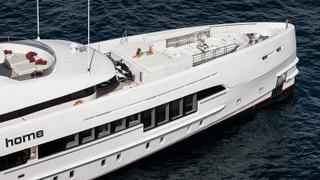 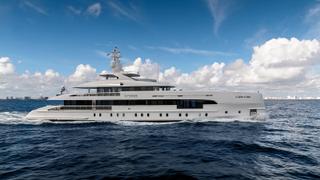 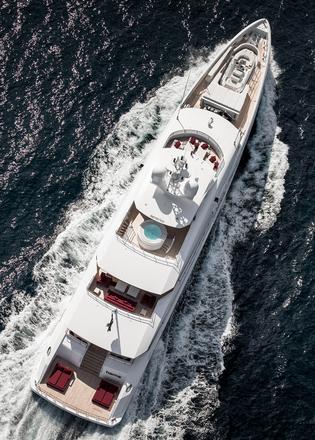 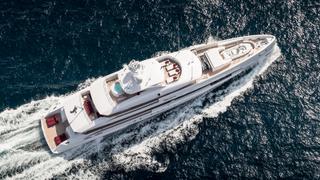 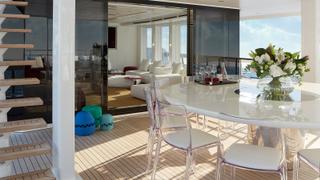 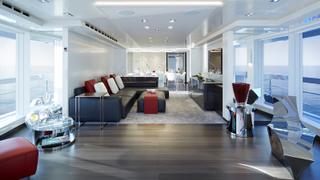 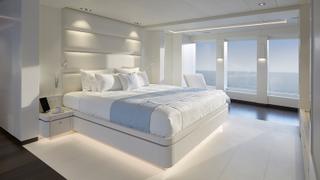 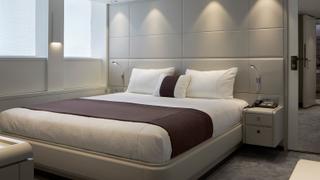 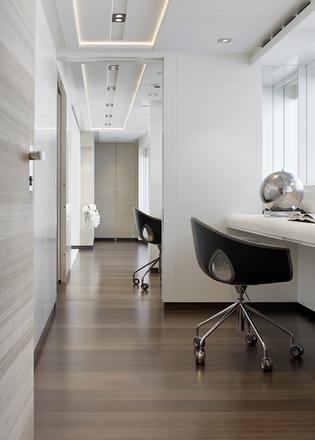 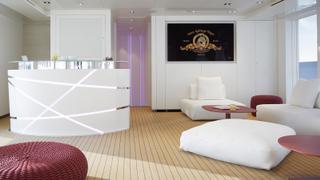 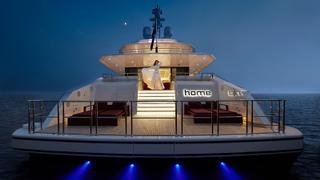 It was the windows that first attracted the owner to this 50 metre Heesen. The rectangular floor-to-ceiling glazing is the first thing you notice from the outside on this yacht, which was started on spec as Project Nova, and it commands your attention inside as well, the panoramic glass pulling your gaze to the natural world beyond.

“He bought the boat because of the windows,” confirms interior designer Cristiano Gatto. “He told me, ‘my idea of being on board is to wake up and see the sea around me — I don’t want to be in marinas very much.’ We worked to simplify and minimise the interiors so that the windows are the artwork.”

It’s fitting also that this is the first hull to couple hybrid propulsion to the proven Fast Displacement Hull Form by Van Oossanen Naval Architects, allowing an owner who loves looking at nature to reduce his impact on it.

Home is another success story for Heesen’s spec-built business model. The owner bought his previous yachts on the brokerage market and didn’t want to wait three years for a new build. So when Heesen’s Thom Conboy showed him a project that had the lines, space and views he was looking for, with the ability to customise the interior within a short delivery time, it was game on.

The yacht’s lines were inspired by another Heesen, 50 metre Sibelle, says Frank Laupman of Omega Architects. The two boats share the aggressive bow, which might be right on trend but also serves a purpose, providing progressive buoyancy when carving through waves. The bow shape also means the crew accommodation can be set further forward. In order to stay under 500GT, Omega created walkaround decks, while also giving the master suite forward on the main deck the full beam.

“This worked quite well,” says Laupman. “We chamfered the superstructure and gave little knuckles in the glass, so the walkaround starts wide then gets narrower — it makes a difference psychologically.” Uninterrupted sightlines from inside are achieved with cut-out bulwarks topped by specially designed handrails.

The interior was started on spec by Sinot Exclusive Yacht Design, but the original motif didn’t appeal to Home’s owner. Gatto was called in after coming recommended. The layout, main partitions, sub-construction and some furniture were already completed; Gatto’s task was less a gut job than carefully laying his ideas on top of an already fixed skeleton.

“We had to study the design that was done and transform it,” he says. “If we needed to redesign everything completely that would have been easier, but then would have caused a six month delay. But the owner is a very fast decision maker. I met him and we redesigned [the concept for the interior] in three weeks.”

To the credit of all involved, she was delivered right on time. Her captain, Nigel Jenkins, who has served as a build captain five times, was brought in to help make this so. “Heesen were on track, but the external contractors were slow in providing information required, and so I was brought in to try and turn it around again. Straight away Cristiano and I hit it off, both with similar standards, both looking for the same thing — to produce a good boat, and a good-looking boat,” says Jenkins.

The owner’s brief was for a modern, comfortable interior; the keyword was simplicity, not minimalism. “The owner used her for seven and a half weeks back-to-back, straight from taking delivery,” says Jenkins. “He wants to be able to live on board about seven months of the year. That’s why the name Home came about.”

The style of Home’s furnishings is similar to what you’d see in the owner’s properties on shore — low, deep sofas, for instance, and usable art in the shape of chaises longues — and the palette is refined to four main hues: white, black, grey and maroon to give a splash of colour. The white materials range from wood and marble to leather and metal.

Texture, tactility and reflection were used to transform spaces. “Materials that have the same colour react differently in light, so the same colours can be transformed by the lighting, particularly white, because of the reflection and the way it absorbs light,” says Gatto.

Although all of the sub-construction of the ceilings, including the lighting, was in place, Gatto edited the lighting plan, a process that proved to be the most challenging. Focused LEDs, custom wall lamps, loose lighting and strip lighting were designed to capture the reflective nature of each of the chosen materials.

Though Gatto spent six months sourcing artworks for the interior, the owner selected just three pieces. The purposeful absence of art on board is powerful and effective as the eye is instead drawn to the scenery outside. The owner plans to use the boat in the colourful cruising grounds of the Bahamas, primarily the Exumas. “When you’re spending time in cold destinations or want to put your focus inside, you need more art. But the nature you see outside is the real artwork,” says Gatto.

The owner will use Home for work as well as play, and two offices that precede the master cabin are designed around his business needs. An inner office, connected to the cabin, is dedicated to the owner’s use, while an outer office has a desk for two so staff can work alongside.

When work finishes, however, play can start. The furniture on the sundeck is all low-slung Paola Lenti pieces, which are also functional — Jenkins points out the yoga mats stored beneath the sunloungers.

Everything is sea-fastened for safety, but movable to create more space for entertaining. There is a projector and a screen set-up, turning the deck into an outdoor cinema. The superyacht spa pool is much used, says Jenkins, and he also points out the dancing pole. “After a few drinks, if you’ve got the party wigs and silly hats on, it’s just for a bit of fun…”

But the real hotspot for dancing on board is the upper saloon. This space is the one that perhaps best shows off the holistic indoor/outdoor ethos that Gatto and Laupman pulled off with such aplomb. “We took out everything, we erased the drawings and made an extension of the outside deck — inside,” says Gatto.

The only built-in furniture is a small bar, and everything else is loose Paola Lenti outdoor pieces that can be used inside or on the aft deck. With full height windows, it’s a lovely place to sit and watch the world roll by, and the glass doors open completely so that the lines between inside and outside are blurred. Or close the doors, remove all the furniture and add a mirror ball and smoke machine to create an epic party room.

More fun can be found on Home’s foredeck, in a telescopic seat that rises from the bow, allowing uninterrupted 360-degree views. It can even be used under way if the conditions are right. It’s the ideal spot to watch dolphins riding the bow wave, especially in the clear water of the Bahamas.

It can’t be forgotten that Home rides on Van Oossanen’s Fast Displacement Hull Form. This is the third optimisation of the design, and one that the naval architect says makes her 48 per cent more efficient than other 50 metre yachts, and with a superior level of comfort. Upping the ante on efficiency is the use of hybrid propulsion.

Home’s captain enjoys the variety afforded by the four engine modes: basic diesel cruising, ideal for quicker passages; quiet mode with electric motors; boost mode, which combines diesel and electric for an added surge of power; and the fourth, which is Jenkins’ favourite: eco mode.

On our sea trial from Monaco to Antibes, we put Home’s various engine modes to the test. On the mains, the captain takes her to 17.2 knots. Boost mode kicks things up a notch, just a bit faster to 17.7. But it’s her silence that speaks volumes. We cruise at 9.3 knots on electric power, the air con louder than the engines.

Wandering into the master cabin, the quiet is disarming as we cut through the water, gazing out of the massive windows and watching the waves move by in soundless bliss. It’s easy to see how the owner will make this yacht his sanctuary, truly his home at sea.

First published in the January 2018 US edition of Boat International.