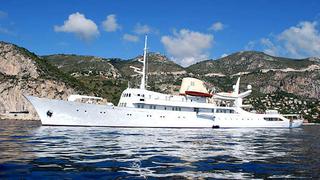 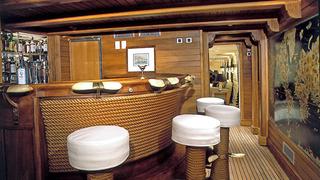 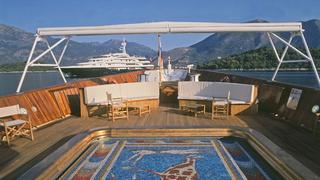 Spending $4 million on a yacht in the years of austerity after the Second World War seemed an act of utter frivolity, yet shrewd philosophy underpinned what appeared to be wasteful extravagance by the aptly named Greek shipping magnate Aristotle Socrates Onassis. The Canadian war surplus anti-submarine frigate HMCS Stormont, which he bought for its scrap value, $34,000, in 1954, was transformed into Christina O: a pleasure palace that vastly enhanced his status – and wealth – as film stars, politicians, bankers and businessmen answered his invitation to ‘come aboard’. They included Winston Churchill, JF Kennedy, Marilyn Monroe, Frank Sinatra and Rudolf Nureyev, and no doubt a few of the shadier figures who greased the financial wheels in those days.

What sets Onassis apart from the more patrician yacht owners of the day, who valued their privacy above all else, is that he virtually wrote the manual for today’s superyacht lifestyle. Espadrilled, tanned and always with an eye open beneath his sunglasses to the possibilities of a little publicity, he epitomised the roguish glamour of the mega-rich. Who didn’t aspire to a lifestyle that revolved around beautiful women, yachts and film stars? Yet, as a shrewd businessman, he was among the first to realise the potential of a yacht as a business tool. Who knows how many lucrative doors a few days’ hospitality aboard Christina O opened up for the man who began his career as a refugee from Turkish Anatolia with $250 in his pocket and a ticket to Argentina, where he made his first fortune.

The 99.13 metre Christina was named after his first-born child, who inherited her father’s yacht at his death in 1975. However, with the memories of those carefree days perhaps too poignant, Christina donated her namesake to the Greek government in 1978, and a period of slow deterioration followed. Greece was in the hands of a left-wing regime, and the former plaything of a capitalist millionaire was embarrassing.

The yacht was rescued in 1999 by an Onassis family friend, John Paul Papanicolaou, who set about restoring her. The work was more extensive than first thought – 560 tonnes of new steel were required to replace corroded plating – but now, as Christina O, with MAN diesels in place of her original steam turbines and many of her original fittings retained, she charters extremely successfully, her 19 staterooms putting her into the exclusive mini-cruise liner market, a role that suits her perfectly.

In 2011 Christina O underwent a 5-year class survey at the H2X Shipyard in La Ciotat, when some mechanical and repair work was undertaken, including careful restoration of her famous Minotaur mosaic swimming pool/dance floor.

A new ‘Callas stage’ was also constructed and installed around the base of the funnel. Although there is an official concert room below – for events like the Maria Callas opera recitals that showcase the yacht’s links to the famous soprano – it was considered that in view of all the available Mediterranean sunshine going to waste, an alternative outdoor space would be a sound investment.

All the Christina O’s original features still exist. The most preserved areas are the Onassis Suite, the famous Ari’s Bar and the concert room. All guest cabins have been completely refurbished in similar style and still use the names of Greek islands, as accorded by Onassis. The pastel colour scheme in all of the cabins was selected by Jackie O and her choice of colour schemes and décor.

Ari’s Bar is one of the most historical parts of the Christina O. Engraved orca whales’ teeth provide places to hang a handbag, or hold on to, around the circumference of the bar, whose surface is still the original massive piece of timber from a sunken Spanish galleon. Similar orca teeth offer footrests on the stool columns, which are covered with the whale penis skin that Aristotle loved to tell his guests about.

Countless reams have been written about this famous yacht in gossip columns, scandal sheets, fashion magazines and yachting journals – probably more so than any other yacht afloat. Christina O represents a special age, an era of giants, from those who owned her to those who trod her decks and gave everlasting ambiance to her interior spaces.

With the yacht being also classed as a passenger vessel, the spirit of Callas lives on in the concert and dinner cruises in addition to up to 36 guests being able to enjoy cruises surrounded by Christina O‘s unique history. To use a Greek word, Christina O was an icon of her time, while the treatment lavished upon her and her guests, past, present and future, should surely guarantee that she remain so.