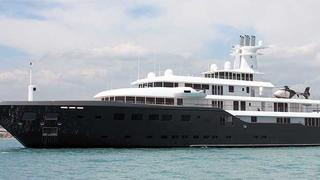 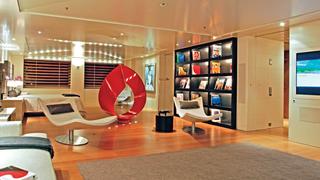 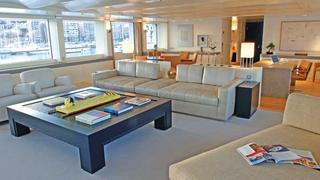 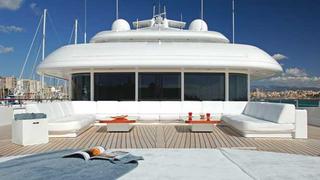 Ice (ex Air), the 90.1 metre explorer yacht built by Lürssen in 2005 and sold to Russian industrialist Suleiman Kerimov, is more than just imposing and stylish. She is also environmentally friendly, the first to have Azipod drive units in place of conventional shafted diesels, and Kerimov changed the yacht’s name to Ice to reflect the purity of her concept. Emission reductions were a top priority in a yacht that was to have the lowest possible levels of noise and vibration. The Azipods cause no layout difficulties, while the electric generators which replaced the two large main engines fit into a single-deck engine room. Exhaust gases are passed not into the sea but through soot-removing filters before being ducted up to the main funnel: eight distinctive stainless steel pipes.

British designer Tim Heywood was given responsibility for both the exterior styling and the interior layout of Rainbow – Lürssen’s codename for this highly secret project. The ducting, however, caused him some initial difficulty. Many of the service and technical areas and some of the smaller guest facilities are concentrated centrally between the duct and the main guest stairway.

The owner’s full-beam suite is on the main deck forward of the central stairwell, together with two further family bedrooms-cum-VIP cabins. The main deck aft is devoted to a bathing centre where guests can take a dip in the large pool between the stairs down to the stern bathing platform, the base for the yacht’s collection of sailing dinghies and toys. Ice also has a helipad for the permanently embarked Eurocopter EC135 helicopter.

Terence Disdale’s interior design eschews marble or gold for space: the ultimate luxury. And an amazing collection of modern art is set in an interior that focuses on the art rather than the backdrop – Zen minimalism, unique among Disdale’s work. Tables and many of the horizontal surfaces are made from limestone, while the five baths were carved from solid blocks so large and heavy that the yacht was built around them. The result is simple, serene and open, enhanced by large windows offering spectacular views.

Ice can be manoeuvred with a single joystick that interfaces the full azimuthing Schottel bowthrusters and Azipods, both of which also have separate controls. A nudge of the joystick rotates the yacht, while increased movement increases speed. Kerimov can walk his guests through the central passageway between the two generator rooms, with their 842kW MWM/Deutz gensets and huge exhaust cleaners, while holding a normal conversation.

On sea trials Ice hit an impressive 18.6 knots, with each Azipod operating at its full 2.5mW. Noise and vibration were low and exhaust emissions almost totally clean. Handling was exceptional: an emergency turn of 1.5 cables in diameter; crash stop (in which the Azipods are rotated 180 degrees) in not much more than a ship’s length. Cruising at 16 to 17 knots she uses 16 to 17 tonnes of fuel in 24 hours – pretty green for a yacht of 2,870 tonnes.