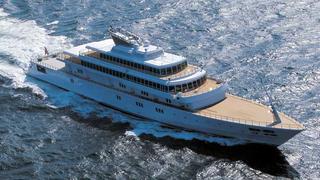 14 January 2015 by adapted from a feature by Dickie Bannenberg

Rising Sun was the last yacht that ever came from designer Jon Bannenberg’s drawing board (literally, as the office was then an almost CAD-free zone), and one that he was destined never to see completed.

To a degree, Rising Sun represented a back-to-basics approach and a final opportunity to work with Lürssen’s lean destroyer-type hull, which had been the platform 30 years earlier for Carinthia V and Carinthia VI. The similarities ended there. Rising Sun experimented with extensive use of structural glass for a clean and stripped-down profile that involved Lürssen and its sub-contractors working on engineering and systems.

Jon Bannenberg’s appointment to design Rising Sun came out of the blue after Larry Ellison had commissioned a number of studies from different designers. None seemed to have the impact that he wanted until Jon Bannenberg unveiled his initial study model one morning in London over a couple of lattes. Things moved quickly after that, and they reached agreement in two emails without even a hint of a lawyer being involved. LE120 became the project’s codename but it did not need Enigma codebreaking skills among the yachting community to work out the vessel’s length and who had commissioned her.

Jon Bannenberg worked on many study models in the early months, including a colossal version that was shipped to Lürssen and used for an initial presentation meeting with the principal sub-contractors. The basic form did not change much from his first drawing. Among the spectacular concepts was a suspended, tube-like walkway through the main machinery spaces for visitors to see exactly what drove her at speeds of 30 knots, and an exposed Z frame structure separating the tender launching areas. This was monumental in scale but sculptural and simple to fabricate.

The exposure of structure was one of the overarching themes of his Rising Sun design – no more clearly apparent than in the web frames of the superstructure, into which the full-height glass panels were set. The initial intent was to have these in raw finished aluminium, but this subsequently got ‘value engineered’ into a metallic paint finish.

His general arrangement layouts of Rising Sun gave spacious guest cabins direct access to the exterior side decks, protected from the weather by 45-degree indents in the superstructure. There was so much space to play with that the top deck was given over entirely to owner use, while a double-height cinema was embedded like the stone of an avocado, with the corridor arcing gently around it. And, of course, a basketball court was obligatory.

All in all, Jon Bannenberg’s original concept for Rising Sun survived relatively intact after his death. She divided opinion, like many of his designs, and her sheer scale – eventually growing to 138 metres – made even Larry Ellison pause for thought. But she is certainly a Bannenberg original, and somehow neatly completed the circle started with Carinthia V and Lürssen some 30 years earlier.

After her launch in 2005, Larry Ellison sold part ownership to media mogul David Geffen, who became sole owner in 2010 when he bought the remainder of the shares. She has since undergone a six-month refit at Lürssen’s yard, ending in May 2011. Changes included lengthening the hardtops, which altered the profile slightly.