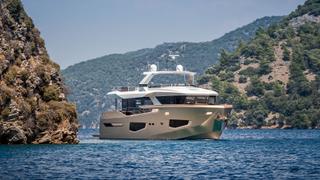 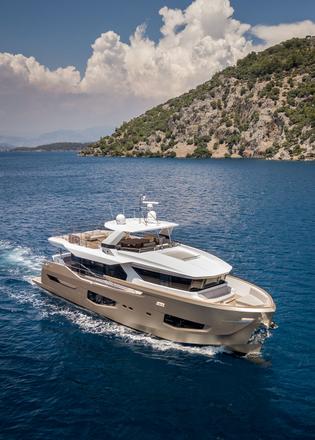 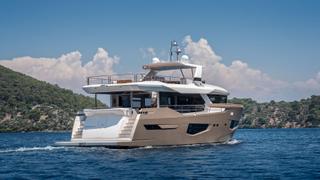 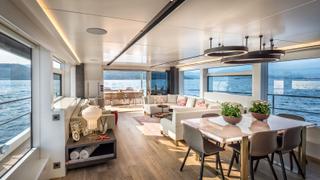 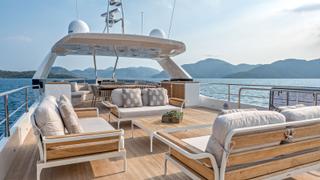 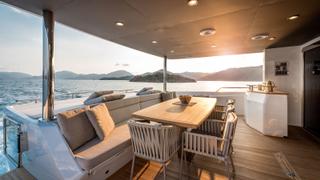 Numarine has condensed the explorer ethos into a chunky 26 metre with a range of 3,000 very quiet nautical miles, says Alexandra Groom...

It’s boom time for the explorer yacht market. These days owners want range, autonomy and practicality – and supreme comfort, too, of course. There’s no shortage of monster projects in build or hitting the water to back this up, from 116.1 metre Ulysses, recently delivered to her owner, to the ground-breaking 182.9 metre Project REV, to the September issue's cover star, 73.2 metre Planet Nine. But it’s not all about LOA, according to Turkish yard Numarine, which has just delivered the second hull in its new range of plucky little explorers. The yard has boiled down the explorer essence into a neat 25.89 metre package, loaded with intelligent systems, cleverly used spaces and a very impressive range of 3,000 nautical miles.

Minella is the second Numarine 26XP to hit the water (but the first full displacement version) and it belongs to Omer Malaz, the founder and CEO of Numarine, which tells you a little about the confidence he has in his yard’s output. “We wanted to have one boat that was in this category because it’s more affordable to buy, build and maintain, and we saw that it would be popular in the current climate,” explains Malaz. “This yacht came about from specific market analysis and intelligence. We played around with a few designs, and then took them to a knowledgeable group of owners. We took their feedback on board and ended up where we are today.” And where that is, is a genuine long-range luxury retreat.

Accommodation on Minella is all below decks, with a master amidships, a VIP cabin in the bow and two guest cabins. The style is contemporary yet homely, with stylish furniture in a warm colour palette, metallic accents, tinted mirrors and modern artwork. The master cabin sets the theme, with warm blues and greys taking centre stage. This space really makes the most of the boat’s wide beam, and the big windows – a Numarine staple – allow plenty of natural light in. Clever space-saving touches are used to keep things roomy, such as the television and mirror combination and the integrated vanity table.

A large bathroom uses Efesus Stone tiles on the walls to create a bamboo pattern and custom feel. Elsewhere, woods on the ceiling and contrasting textures come together to elevate the design.

While the cabins are impressive, it is really the common guest spaces that are the highlight of this yacht, and in particular how they work with the exterior. “We use a lot of glass and windows in our boats,” says Malaz. “It’s beautiful out there; why would you want to block yourself in?” A section of the large saloon windows slides open, creating a through draught of fresh air. With these windows and the aft doors thrown wide open and the water gently lapping the hull on a balmy day in Göcek, the amber scent of the nearby pines and the sound of cicadas in full song waft through the saloon on a warm breeze. Malaz is looking very pleased with his decision to buy this second hull.

The saloon has been designed to be functional as well as relaxing, with clean, open sightlines and a minimalist approach, doing away with much of the fixed, bulky furniture. On top of light oak floors, an informal free-standing sofa arrangement offers up a place to relax and a pink backlit onyx dining table adds a pop of colour and glamour. Malaz’s wife was very involved in this side of the project. The yard welcomes customisation within the bounds of certain bulkheads; there is even a choice of a three, four or five cabin layout.

Above, the 55 square metre flybridge feels ample and is fitted with more free-standing furniture. “This was one of the reasons we decided on this yacht,” says Malaz. “My wife wanted the flybridge and all the extra space it gives.” The flybridge comes in two versions, one with a crane and tender stowage and one without. Minella is without, which has turned the deck into a flexible space for partying or relaxing.

A demonstration of Malaz’s long experience is forward in the shape of the central flybridge helm flanked by two oversized sofas. His pet hate on yachts of this size is that there’s never enough comfortable space around the helm, so an owner-operator will inevitably be left by themselves, while the rest of the guests find more comfortable spots to relax in.

There are plenty of demonstrations of this applied experience elsewhere. “With the XP series, clients expect a certain amount in terms of cruise possibilities,” says Malaz. “This means that a full displacement explorer might want to travel at night, and therefore noise and vibration will be a deciding factor in their choice of yacht.” Lithium ion batteries allow the boat to run in “night mode” for up to 18 hours, with no generator. The next day the batteries charge again while you cruise. At anchor during the day the batteries can also be put into action, but with full air conditioning, sound systems, laundry and galley in operation they will of course need to be charged a bit sooner.

The yard’s efforts in soundproofing are evident throughout: there are foam pads between the ceiling of the cabins and the floor of the main deck to dampen the sound of footsteps from above. All the wood comes from a German company that sandwiches foam between the wood, so even room to room the noise and vibration are minimal. In the master cabin while cruising, the noise levels are an impressive 55dB(A). At anchor with the generator and air con on, these drop even lower, to only 30dB(A).

“As people get more experienced in yachting, they get bored of doing the same routine and routes,” says Malaz. “They want to explore. A typical Numarine customer wants to go further afield; it’s in our nature as human beings, we want to explore new horizons.” Malaz and his family also wanted to do some more extensive cruising and knew the 26XP would be the right step up from his previous yachts, which were all fast planing varieties. “We have big plans,” he says. “We’re going to Mykonos and Santorini, up to Corfu, and then Sicily, Corsica and Sardinia, before finishing in Cannes for the boat show in September. After Cannes, we’re off to the FLIBS, Miami and Palm Beach shows, and I plan to explore the Bahamas and the Caribbean.”

For this kind of cruising, Numarine has built in plenty of redundancy. “There is a double of pretty much everything important, because it is an explorer yacht. The owner might want to go somewhere where you can’t get a service or a qualified technician immediately,” says the CEO. Ease of use is crucial, too, he adds, so the 26XP has been designed to be operated from an iPad, which can be used to switch on the generator, the pumps and more prosaic items such as lights. “It’s a yacht; you can be hands off and have all the crew, or be able to do a lot yourself with minimal crew. Nothing is overcomplicated.”

A semi-displacement version of the 26XP is also available for people who want to get there quicker, but Malaz wanted the assurance of more boat in the water and better fuel economy. The time for speed has past, he says. It’s time to slow down, take it in and enjoy the journey. And with 3,000 nautical miles at your disposal, that journey could take you anywhere.

First published in the September 2018 edition of Boat International.