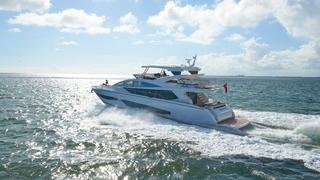 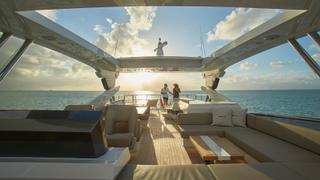 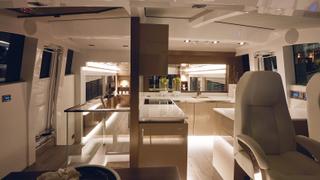 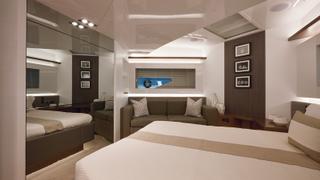 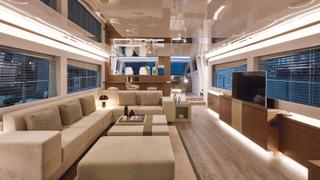 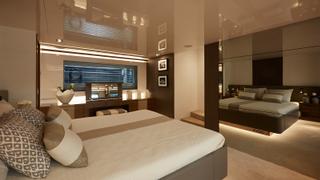 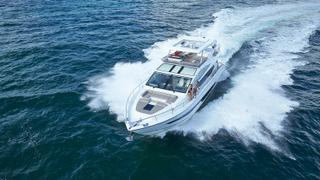 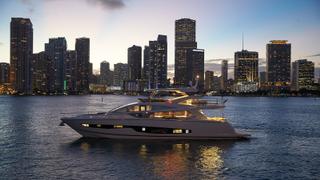 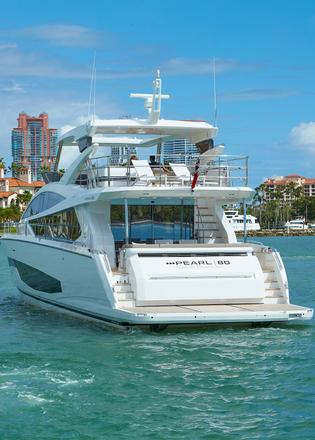 While Pearl was a brand unfamiliar to most Americans, the UK builder’s latest offering garnered substantial attention among the large yachts at the 2017 Fort Lauderdale International Boat Show. One thing show attendees did recognise was the name of the naval architect — Bill Dixon. At a press conference held on the attractive stern of this 24 metre flagship he said, “I’ve been doing boats for Pearl for nearly 10 years, since the 50 footer [15 metre]. This is Pearl’s biggest boat so far. The next Pearl, already in production, is 95 feet [29 metres].”

From the nicely appointed aft cockpit, side decks stretch forward port and starboard, and, at the touch of a button, full height steel and glass doors slide open to an inviting saloon where a white gloss overhead redistributes the light from outside. With a large L-shaped sofa, big square ottomans and a sit-down bar at the forward end, this is like a chic, grown-up apartment. But what really grabs attention is that you can see out of the forward windows from nearly anywhere.

On starboard a short run of steps beckon up to an aft-facing L-shaped banquette with a table under wraparound windows. It is much nicer to see this upon entering the boat than all the gauges and gizmos of the pilothouse. The aft wall of the galley between worktop and cabinets slides down electrically to open it up to the bar and, by extension, to the saloon. The light and views this admits are admirable, but what you don’t see is again equally notable: there is no formal indoor dining area.

“We don’t think most people will use a formal indoor dining area on a boat of this size so we have decided to use the space to make a really great, uncompromised saloon,” says Iain Smallridge, managing director of Pearl Yachts. “There are outdoor dining areas on the aft main deck and flybridge, plus the informal dinette adjacent to the helm and galley.”

The décor is exceptional. Designed, as are all the Pearls, by Kelly Hoppen, the 80 on show features the ‘Studio’ interior décor package with white marble, walnut, natural linens and stainless steel detailing — one of three designed by Hoppen.

“The design is traditional but contemporary: clean lines and neutral nuances, creating a general feeling of refinement,” she says. “We have inserted touches of cool grey in what is now 'my' palette of colours from taupe beige, my trademark, to create beautiful, relaxing interiors. You want that superyacht feel but with a neutral tone to ensure the space isn't too overbearing.”

Although the saloon sofas are low and modular, with ottomans in the centre useful as extra seating or tables, the high and low windows make it easy to see out while seated or standing. “We put a lot of effort into how far to raise the pilothouse and how many steps were needed to access the four cabins below,” says Dixon. “It turns out that too many steps is a turn-off. We have enough to guarantee separation of spaces and good visibility for the indoor helm and headroom for the twin guest cabins below. For the master suite, we gain overhead height [under the saloon] by putting that cabin two further steps down.”

Miami is definitely this boat’s element. On the sea trial, a strong north-east breeze has built a small chop, which the Pearl’s fine entry and flare render negligible. In the vicinity of Bear Cut, where Key Biscayne begins and the current and breeze are freshest, the cruising speed is 28 knots: still nothing to rattle the dishes. The Pearl 80 displaces 55 tonnes so she is no skittish trifle, yet shoving the throttles forward from idle quickly produces the 26 knots cruising speed; there is smooth acceleration and a nice transition to plane in less than 10 seconds.

Technically, her top speed is 35 knots, but downwind with full water and half fuel load she hits nearly 38. “Although it’s a sporty boat it is very voluminous and we worked hard to make sure it’s not a big lump pushing water,” Dixon says of the warped-V hull. Pulling into Miami Beach Marina, where the current is notorious, the joystick mooring control and bow thruster is a stress buster.

Take a closer look at the Pearl 80 yacht

You can tell there’s real boat knowledge at the helm of this company. Smallridge, a boat captain himself, started fitting out aft-cabin cruisers on 12 and 13 metre fibreglass hulls in Stratford-upon-Avon in the UK in 1998 with partner John Yarnold. These models were successful but then the recession happened. “I knew we had to change the business model and focus on larger boats.”

In 2002 they commissioned Dixon to design the Pearl 55. In 2006, the Pearl 60 followed, and that, says Smallridge, pushed them out of England. “We are a boutique builder and you can’t build a handful of boats a year in the UK and be profitable,” he says.

With their sights set on a 23 metre, they found an Asian build partner that was familiar with GRP construction and had space for a line of semi-custom boats. While the hulls and decks are assembled and the major machine components installed in Asia, the yachts are delivered to the UK for fitting out.

Now, with the Pearl 80, the company has branched out to expand its market to the US, working with Stateside brokerage partner Atlantic Yacht & Ship (Baxter Marine handles the European market). The build target for the 80 is four to five units per year; No 2 launches in March and No 3 in September. The Pearl 95 will follow for debut in the US in 2018 while the Pearl 75 will be retired, leaving an active range of 20, 24 and 29 metres. It seems this pearl has room to grow.