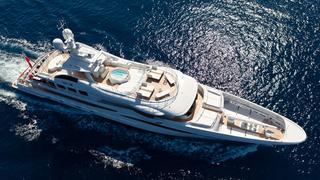 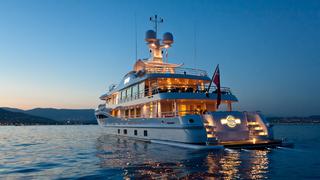 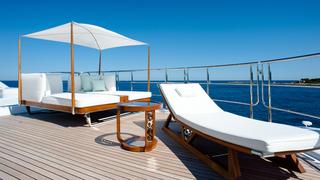 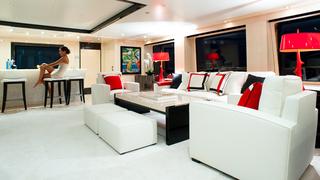 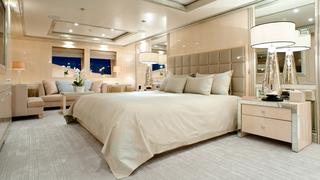 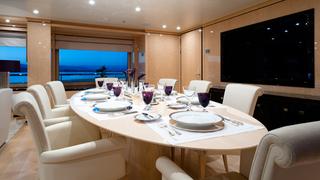 Step One - an Amels Limited Edition

When the yacht Deniki first arrived on the scene back in 2007, she heralded the first of a new generation of yachts from the Amels yard in The Netherlands. As a project started in 2005, the ethos was simple – draw up a common hull, superstructure and engineering platform that would streamline the build and reduce delivery time, allow a high degree of customisation, build to the highest standards of finish and let the market decide the rest. The Limited Editions concept was born.

Five years on from Deniki’s launch, and the success of that concept is plain to see. The Limited Editions range has expanded to include five current models right up to the latest, due to launch next spring, in the form of the scimitar bow Amels 199, while plans for the largest in the range – the Amels 272 – are already well advanced. But that doesn’t mean that the existing models have remained static – the original Amels 171, of which Deniki was the first example, has also grown and matured.

Step One is the 10th model to be built on that original 171 platform and she marks the latest evolution, via the Amels 177. At 55 metres, Step One is designated the first Amels 180, and there are currently a further five 180s in build. You might be hard pressed to notice a significant difference between Step One and _Deniki _when seen at a distance – she carries the trademark Tim Heywood profile, low slung but with feature curves atop the superstructure and signature superstructure windows – and it is only when you delve into her spaces on board that you start to see where that extra three metres has been put to use.

‘It all relates to the aft end, and providing more facilities in the gym and beach club,’ explains Heywood, who has been responsible for the lines of all the Limited Editions models. ‘The extra length also gives a more gracious and grander feel to the aft deck at main deck level.’

The extra of _Step One _length has not, however, meant a change in exterior styling. The relatively low profile remains, and this has been a conscious decision on the part of both designer and yard. ‘The key challenge,’ says Victor Caminada from Amels, ‘was to keep the profile elegant and slick, and not create a wedding cake. Tim Heywood did a wonderful job.’

‘The original plan for the Limited Editions range,’ Heywood says, ‘was to sell six in six years. I’m so pleased with the success of them. The development of the line has been split between the yard and the clients, in the sense that the clients had their input on deciding whether to have, for example, the full-width upper saloon, whether to have a helipad or not, and other tweaks. So although it is in some senses a platform concept, Amels is very flexible to cater to clients’ wants and that’s what has led to the evolution into the 180.’ The Limited Editions concept also allows for a fully custom interior design – and indeed Amels has worked with five different interior designers on the 171-180 range to date.

That client input is obvious when you head to the sundeck which, on Step One, has been extended over the bridge coachroof to give an additional 32 square metres of deck space. The result, at 25 metres long and covering 155 square metres, is a vast top deck that certainly challenges all-comers for the title of biggest sundeck on a 55 metre yacht. The forward part offers daybeds with a spectacular view, and this area doubles as a touch-and-go helipad for a maximum take-off weight of 2,000 kilograms. Midships is the 3,000-litre spa pool, while an alfresco dining table is nestled between the sweeping curves of the side coamings and shaded from the sun under the distinctive comms arch.

Drop down one deck, and you enter the upper saloon. Full advantage of the space has been taken by opting for the wide-body design, and with large, deep windows the resulting space is both bright and fun. Interior designer Laura Sessa worked closely with the owner’s wife to create a colour palette that focuses on creams and whites, maple wood and white onyx contrasted against black details. However this is no neutral scheme designed to appeal to, say, a broad range of potential charterers – Step One is a purely private boat with a distinctive family theme.

The master suite is found on the main deck forward, and for Step One the owner chose to turn the anteroom into a large library. The main cabin forward offers luxurious space, and future owners can specify an opening balcony here should they want further connection with the outside. The bathroom to port is prodigious in its volume, and is backed by an expansive walk-in wardrobe-cum-dressing room.

The galley is located amidships – perhaps the one concession in the layout. However, it does have the advantage of being on the centreline, which minimises the effects of any movement in a seaway. Moreover, while not the largest of galleys, it has all the facilities a chef needs combined with a sensible and practical layout. A serving hatch feeds through to a longitudinal pantry, which is just a few steps away from the main dining area forward of the saloon.

The saloon itself has been a key beneficiary of the extra length, and the floor area is increased by some 30 per cent. With no sideboards to divide the space, and with large windows offering a view and plenty of natural light, the area is a joy and one that will actually be used. Seating is to port, while aft – in the area necessarily constricted by the technical ducting – a port-side bar makes the most of the space. The stairs to the lower guest cabins – located quite far aft thanks to the midships engine room – are also found here.

The guest cabins are a delight, and have been considered so as to offer the greatest flexibility for a family cruise. The forward suite features a sleeping cabin to starboard and a seating area to port when in VIP mode, but a soundproofed sliding partition quickly converts this into two separate and generous doubles, each with its own en suite and walk-in wardrobe. The aft cabins are similarly conjoined, with the port aft cabin offering the addition of a Pullman.

The build quality of Step One is, as one has come to expect from Amels, first class. The stainless work on deck, for example, is flawless, and this is in part down to the yard’s philosophy to subcontract such elements to experts in a given field. The same is true of the paintwork, which has been applied to the highest of standards.

The technical spaces too are testament to the commercial heritage of the parent Damen Group – heavily over-specced machinery, every concession to noise and vibration taken in, and no unnecessary materials. To help reduce emissions and keep the hull clean, the generators feature soot removers from Hug Engineering, originally developed for trains. The engine package itself – twin MTU V16 2000 M70 diesels – has remained unaltered since Deniki, and if you needed evidence of the effectiveness of the spec, consider that Deniki has just been to Antarctica with zero modifications.

Step One is a classic example of how a shared platform and exterior lines do not mean carbon copy. While some elements of the layout may be the same, Step One’s clean but fun interior décor, intelligent working of the guest cabins, expansive sundeck and family orientated ethos are as individual as any fully custom one-off build. Limited Editions in name, but certainly not limited.