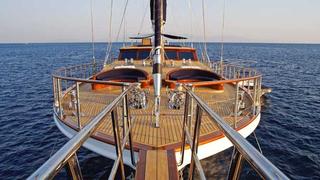 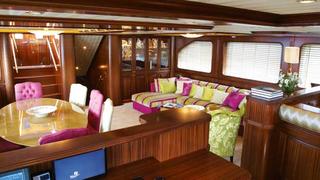 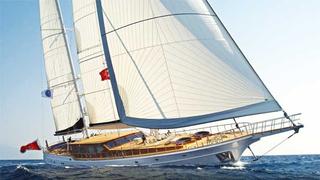 Clear Eyes was conceived for comfortable long voyages, ocean passages, charter business and family use. That’s why I strongly believe we took the right decision by choosing a long-keeler,’ says Erkin Yagci, a naval architect from Izmir and one of the three partners of Turkey’s Pax Navi.

Clear Eyes reflects the slogan ‘value and volume for money’ that its owner (and Pax Navi’s major shareholder) chose for the shipyard’s ad campaign. ‘Clear Eyes is a wonder of volume,’ he says. ‘The aft deck offers a huge sunbathing area with an integrated spa pool, alfresco dining and a little bar around the captain’s helm station. The top deck is exclusively for sunbathing and relaxing.

‘The front deck carries toys like Seabobs and jet skis, and has two very intimate crescent-shaped seats. Below, Clear Eyes offers five spacious cabins for up to 12 guests, plus 72 metres squared of crew area that is separated from the rest of the yacht. The secret of this cruising ketch lies in the hull shape of traditional vessels, which provide at 39 metre deck length the same volume which is usually found on 50 metre sailing yachts.’

The main saloon is divided into four sections. Seating to port and a dining table set for eight to starboard take up the aft area. All freestanding furniture is Swiss and gold painted, and bright, daring upholstery in deep pinks, greens and oranges abounds, contrasting with a light brown deckhead and moquette.

The feature wood is classic mahogany, with L-shaped mahogany furniture. Everything is custom built by Pax Navi’s skilled craftsmen under the supervision of interior designer and the yard’s third partner, Yavuz Erkan Ozhan.

Further forward at the midships point are the doors of two en suite guest cabins that can be combined to create a spacious master suite. The other three guest cabins are located aft; two ensuite twin guest cabins and the 30 metres squared master cabin. It ends with the wide transom, which is pierced by galleon-like windows giving a view to the infinity of the sea.

The crew quarters are accessed from the bar area in the main saloon. First up is a huge, square galley, opposite of which lies a crew mess with a table and seating for six. Aft is the spacious engine room. Forward, there are four crew cabins. The captain’s cabin, to starboard, has an en suite, while the remaining cabins accommodate seven crew, sharing two heads forward.

With the anchor weighed and the 311 metres squared genoa set, Clear Eyes seems to be at ease in upwind conditions. Maximum hull speed is about 14 knots. Her ketch rig comprises a 40 metre main mast and a 32 metre mizzen, both built in aluminium by Formula Marine and held in place by Nitronic rod rigging.

Deck gear is from Lewmar, while Reckmann supplied the headsail furlers, and Turkish brand Data provided the anchor windlass system. There is no in-boom or in-mast furling for the Halsey-built sails, with the yard choosing instead slab reefing and a Park Avenue boom.

The Opacmare deck cranes, one per side, are hidden beneath the side decks amidships, just in front of the captive genoa sheeting systems. The load capacity of these two cranes is 400kg each, more than capable of lifting the 3.5 metre AB crew tender and toys.

The guest tender is a 225hp Mercury-powered NorthStar RIB, with boarding enabled via an hydraulic Opacmare ladder, which flattens before disappearing into the starboard side of the hull just below deck level.

‘Value and volume for money’… a particularly apt description for Clear Eyes, whether you are looking to buy or to charter.