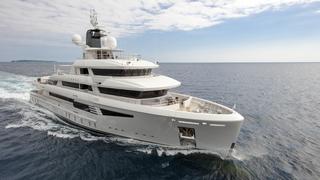 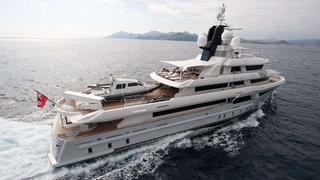 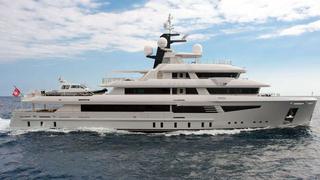 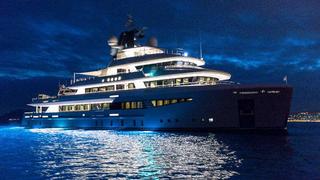 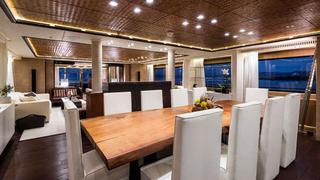 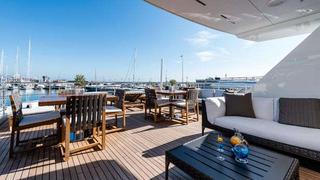 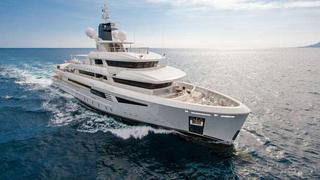 The owner of 49.75 metre Cosmo Explorer superyacht I-Nova, an entrepreneur from Eastern Europe, is not the type to recoil from risk. It is safe to say that the ‘risk equals reward’ motto was embraced with enthusiasm by this gentleman. The successful result allow us to view him as a visionary owner who casted conventions aside, took on the responsibility of the outcome and succeeded in having his yacht built exactly how he wanted her: a bold expedition vessel combining all the comforts needed for prolonged cruising.

Her styling has a strong personality thanks to a series of spatial solutions her exterior and interior designer, Cristiano Gatto, developed according to the owner’s input and requests. I-Nova, which is currently for sale, has an upper deck featuring an informal salon/TV room and playing area opening onto one of the most surprising features on board: a huge aft deck where two large tenders – a 34-foot Fabio Buzzi tender capable of a top speed of more than 50 knots and a Scorpion 8.5 ST rib tender, plus an imposing five-ton crane with a 30-foot radius – are stored. The semi-enclosed Buzzi rib tender allows the owner and his guests to cast-off and return safely even in the roughest of waters and to reach quickly and comfortably beaches or favorite diving spots. When the two superyacht tenders are in the water the clutter-free surface offers the perfect location for hosting a big party.

‘Well-worn paths lead to safe goals but not always to the best ones,’ I-Nova owner says. ‘I had a precise idea in mind, and I soon realized that most shipyards I asked to build my yacht were inclined to tweak my idea to fit their well-established models and procedures. So I decided to do it myself. I was aware of the risk but my confidence was high because the people I hired had all the qualifications needed to achieve good results.’ The owner worked to establish the yacht division and properly equip the shipyard in Greece for his new build while the hull construction began through a subcontractor.

At first glance, the yacht’s high freeboard and vertical bow, combined with elegantly shaped decks, speak of I-Nova’s character and seaworthiness. The yacht’s hull was reinforced in the bow section with extra thick steel plates, and the propeller shafts, propellers, sea chests, rudders and steering gear systems, as well as the seawater cooling system, were designed to meet ABS’s requirements for the D0 Ice Class notation.

Harmonious balance between aesthetics and functionality was pivotal to Cristiano Gatto’s vision, and I-Nova, with her outstandingly simplicity, exemplifies this concept. No frills or embellishments encumber the explorer’s design, but her designer’s meticulous approach to styling is clearly apparent inside and out where, for instance, a cleverly designed lighting system enhances shapes and materials. With five decks, plus a tank deck for spacious fridges, freezers and storage rooms, I-Nova could easily appear bulky. Gatto added a diagonal design element amidship cutting across horizontal planes that taper in long aft decks. This feature combined with the reverse windows of the wheelhouse and of the owner’s panoramic lounge on the upper deck, adds a dynamic touch to the imposing composition.

Gatto, a sculptor, draws inspiration from his own artistic background to create contemporary artworks and decorative items or to select them from a small group of like-minded artists and suppliers. He designed most of the furniture on board so that the materials, shapes and style found onboard reflect both the taste of the owner and that of the designer. It is in the main saloon that one becomes aware of the theme that runs throughout the yacht’s interior. Weathered teak flooring, limed teak bulkheads and furniture with dark brown wengé frames compose a modern, muffled atmosphere with an ethnic flair. Despite the many materials used, the overall feeling is of a cohesive décor. Varied wooden surfaces offer a pleasant tactile and visual experience. A rare and precious wood called Kauri, one of the world’s oldest timbers, was used to create the extraordinary dining table made of a solid plank provided by Italian furniture maker Riva 1920.

I-Nova is a versatile yacht with a good balance between indoor and outdoor spaces. There are several areas where the owner’s family and guests can share meals (for instance, the informal al fresco dining on the bridge deck pictured below), yet the yacht also features a few nooks and more intimate settings, such as a small terrace in front of the panoramic lounge or a cozy sofa sheltered by the superstructure on the bridge deck.

Powered by twin MTU 16V 2000 M70, this 467-gross-ton yacht, which displaces 782 tons, can reach a top speed of 15.6 knots and has a range of no fewer than 5,500 nautical miles at 13 knots. ‘She performs well, says Captain Odysseus Nichroritis. ‘The round bilge steel hull features a bow bulb for improved efficiency and seakeeping. Despite her five decks, a low center of gravity and fine entry at the waterline grants smooth motion and great stability even in heavy seas.

Zanziba: the gulet with a difference launches in Bodrum