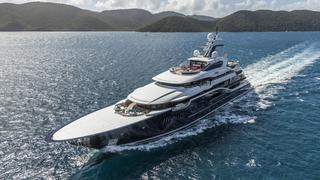 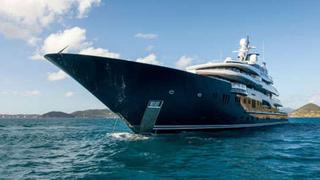 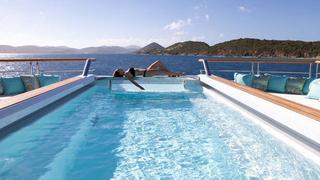 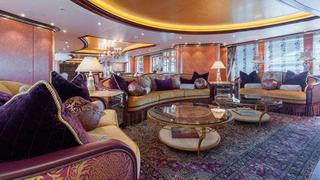 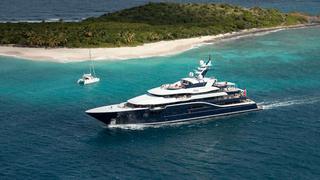 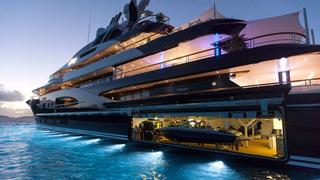 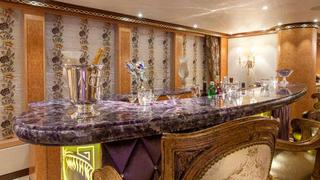 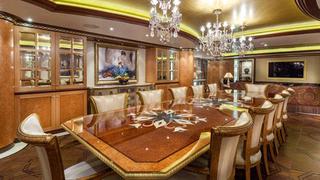 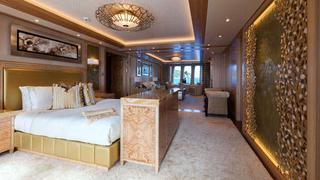 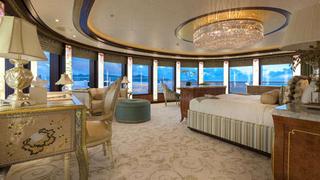 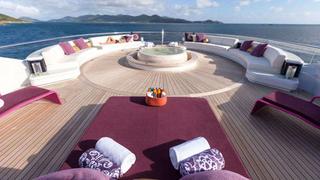 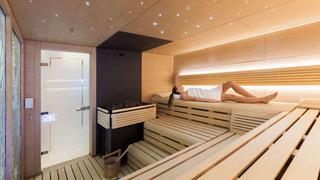 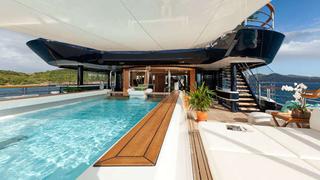 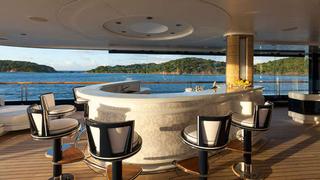 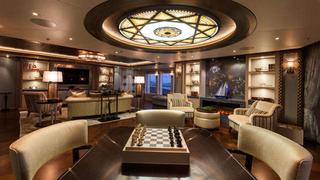 With Lürssen’s 85 metre superyacht Solandge, every bit makes sure you are having a good time, every element is about living life to the fullest. And it’s not by accident. Solandge, says Richard Masters, the yacht’s project and operations manager, had a long design incubation.

‘The owners had another, smaller Lürssen that they bought on the brokerage market and refitted,’ Masters says. ‘They knew they wanted to build their own yacht at Lürssen, so in 2007 signed a contract for a slot that wouldn’t even become available until 2010, which gave them a tremendous amount of time to refine their ideas. They looked at a great many yachts in the meantime, while a special team was assembled to help the shipyard implement the owners’ plans.’

Solandge is nearly 20 metres longer and one metre wider than her predecessor, and offers one more guest cabin – a full-beam VIP. But as senior chief engineer Travis Ludbrook says, ‘In terms of the technology that was available to the new build, the nine years makes a tremendous difference.’

Along with design details and an insistence on the comfort of everyone aboard, sound and vibration engineering were two hot-button issues. Decibel levels were part of the construction contract, although Masters says the yard exceeded the requirement by 20 per cent in some places.

Delivered in 2013, Solandge is based on a modern 80 metre hull and engineering platform similar to that of Lürssen superyacht Phoenix2, superyacht Ace and Quattroelle, ‘The yard’s record keeping is exceptional; if they find something they think is an improvement, whether is it a material or a process, they just adopt it.’ The folding and lowering stern stairs, an adaptation of those developed for use on Lürssen’s 88m superyacht Quattroelle, launched in 2012, are a good example.

All custom yachts by definition present an owner’s vision. With a yacht beyond 60 metres LOA, even a bit of tentativeness translates to a great deal of cautious, repetitive conservatism or worse, confusion that goes beyond eclecticism. Solandge is innocent on both counts. Both Masters and the yacht’s interior designer, Eileen Rodriguez, begin their description of the yacht and her build process with the phrase, ‘The owner had a vision.’ That would seem to be an understatement. So would the designer’s comment, ‘They like bright colour.’

Espen Øino was asked to create a profile design based on the owners’ experience with the previous vessel. This included all guest suites on the main deck along with a rather grand saloon area and an owners’ deck above. During the design period, however, Øino says it became clear that they were prepared to push boundaries and explore more innovative exterior forms.

The final product is a mix of gracious, soft shapes and aggressive hard lines and knuckles; opposite but complementary languages that generate energy. The curves, Øino notes, are mostly in the longitudinal planes with the hard edges on the transverse. The exterior paint scheme, especially the white sheer line, adds emphasis. In combination with the white boot stripe, it optically lowers the yacht’s massive freeboard at the transom, making her seem less formidable from the water.

Step two in the brief was to create many places for guests and family to hang out together or chill-out alone. Øino’s directive was to give each deck and space a distinctive function plus create the supporting furniture and built-ins such as bars, buffets, dining areas, a pool and two hot tubs. With so much space to work with, he was able to incorporate an exterior cinema and nightclub with DJ station on the top deck, an indoor/outdoor gym, a sheltered main-deck reception area aft and a private outdoor seating area in front of the owners’ suite. Captain Maxx Ainsworth adds, ‘We were able to fit in a substantial tender garage, a full dive centre and a sauna aft with access to the swim platform.’

Pushing boundaries was also an aspect of the yacht’s interior, both in scope and detail. To achieve an open plan living area on main deck, the spacious aft deck opens onto a multifunctional saloon of more than 172 square metres, unbroken by supports.

Setting the tone for the exuberant, joyful fantasy named Solandge is the saloon entrance, two stunning floor-to-ceiling panels of LED backlit amethyst quartz. The stone is sliced thin and pieced together like a mosaic and sandwiched between clear glass. To port it is flanked by a Bechstein piano and to starboard by a Venetian console table. The large bar on port is also decked with amethyst and honey onyx, the stone that borders the hardwood floor.

Opposite the bar is a cosy seating area, then a massive dining table fitted fore and aft under Schonbek chandeliers dripping with amethyst and rose quartz crystals, and neatly engineered not to rattle. Forward of the dining area is a much larger seating area facing a fireplace and a TV screen concealed behind a painting of a musician. This is just one of the numerous spots throughout the yacht that is wired for karaoke – the owners sent their build engineer to discover the robust, high-end karaoke equipment used in the best clubs and bring the same Studio Evolution system to Solandge.

The yacht is divided at its axis by an atrium lobby dominated by a 15 metre lighted sculpture that has come to be known as the tree of life, inspired by the owner’s request to have something running the entire height of the vessel from the tank deck. Made in California, the sculpture contains 1,423 points of light, and is encircled by a magnificent stainless steel and leather bannister that anchors the floating staircase.

Forward of the lobby, the guest cabins are more modern, each with a different colour scheme. One is convertible to a guest office/media centre, while the VIP suite can be converted from a cabin with attached sitting room to two separate cabins. Each half makes a spacious cabin, but together, the suite with its large windows, wardrobes and bath seems suitable as a master. That is, until you see the master suite on the deck above.

On the owner’s deck, the apartment includes a private office, his dressing room and bathroom, her dressing room and bathroom, and the cabin itself with 180-degree views overlooking the bow, outdoor seating and a private spa pool. All the spa pools on board are mosaic-clad infinity tubs mounted above deck level. Water flows over the top edge into a recess below teak grating. This keeps the pool and its surround from being a major, view-blocking structure.

Back inside the owner’s suite, a casual sitting room aft has a fireplace and a nautical theme, with a colour scheme similar to the upper saloon. Handmade Italian furniture includes a small table and chairs, a lady’s desk with a leather top and a chest of drawers, while hand-painted backlit window mullions depict themes from the Garden of Eden.

Guests can enjoy a top-notch spa facility aft on the bridge deck. Facilities consist of a spacious sauna, steam room, massage room and a beauty salon connecting to the gym and outdoor swimming pool. A colour-shifting glass-bubble wall provides ambiance and privacy for the massage suite.

The sun deck is large and multifunctional as per the owners’ directives. One beach-chic section features U-shaped seating under draped tent material. The centre deck focuses on a horseshoe-shaped bar with gold mosaic finish, while tucked away to starboard is a romantic bed-size platform piled high with cushions under a twinkly star overhead. With the open sunning space in full entertainment mode, the deck hosted 60 people for a New Year’s party. Guests thoroughly enjoyed a unique dance floor above the spa pool.

‘The large exterior living spaces reflect the current trend for outdoor decks that mirror all the interior functions for guest living,’ says Øino, ‘Arranging spaces to lounge, eat, drink and play becomes a major factor. The outdoor furniture on Solandge is complex and incorporates edge lighting and features that allow entertaining to be spontaneous.’

Which is a good place to bring up the service aspects built into Solandge: they are exceptional. ‘The owners care about service, but they care even more about the well-being of their crew,’ says Masters, ‘and he respects their input.’ In fact, 11 of the crew came with Captain Ainsworth from the previous boat, including a pair of sisters and a father and son team. Superyacht crew areas are designed with care, and crew pathways throughout the boat are ample and clever, so no need to squeeze by each other with a load of laundry or supplies.

Reflecting on the project, process and its conclusion, Rodriguez says, ‘The owners wanted every inch of this vessel to be special and have a meaning. It’s difficult to design 85 metre of “special”, but we have accomplished this for them in a very controlled way. We think it’s their dream come true.’ And a joyful one at that.