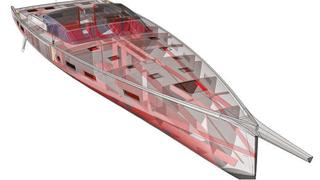 Sitting in a deli-restaurant in a small town in Lombardy, I approach my Milanese risotto with the chef’s instructions still sounding in my ears. The rice has been carefully sat atop a layer of Parmesan ice cream, and the directions are simple but unusual: eat vertically. It sounds like an unlikely combination, but that act of eating vertically proves a revelation – it is quite simply one of the best risotto dishes I have ever tasted.

I am enjoying dinner with Marco Ramundo, chief executive of the Maxi Dolphin shipyard, and the parallels between the risotto dish and a project that Maxi Dolphin is currently cooking up suddenly seem very apparent. In build at the yard near Brescia is an extraordinary 30m sailing yacht, which has been designed to be one of the fastest cruising superyachts yet conceived.

Designed by Finot Conq, the FC 100 has its sights set high – speeds of up to 28 knots have been predicted in the design VPP software. Naturally, she is full-carbon, but the build has gone beyond compromise in searching for every possible way of stripping weight out of the hull, fit-out, finish and equipment, to ensure she hits that target speed when she launches early in 2013.

Finot Conq designed a super-fast cruiser, and post-design they had to find someone able to build such a difficult yacht

Finot Conq is well known for its extreme racing machines such as Hugo Boss and other Open 60s as well as cruising yachts. The FC 100 was created for an owner looking for the ultimate cruiser in his first sailing yacht.

Her race heritage is obvious, not only from the choice of construction materials – carbon and Nomex, with honeycomb used extensively for the interiors – but also in her lines. She carries a hard chine all the way aft; her ballast comes from a deep-draught lifting keel and water ballast tanks; and she holds her 8.3m beam almost to the transom.

‘Our client is an ambitious person looking for something special,’ explains Ramundo. ‘Finot Conq designed a super-fast cruiser, and post-design they had to find someone able to build such a difficult yacht – difficult because it has to be built in very light materials to meet a strict weight target.’

That weight target is key to the project – an all-up displacement of just 51 tonnes. With Maxi Dolphin having launched a 20.4m in 2011 with a very similar philosophy, the timing was just right – and with the yard’s solid financial foundations (it is part of the extensive Terra Moretti Group) – it was a natural choice for the build of the FC100.

Seeing the yacht under construction, and before the interior has been fitted, it is clear that this is an unusual build.