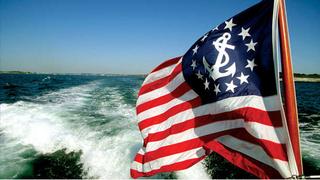 20 January 2015 by Frances and Michael Howorth

The flag state, or nationality, of a yacht is important because it controls which country has the right to prescribe and enforce laws governing her operation. A ship must sail under the flag of a single state. The most common method by which a ship is granted the nationality of a state is by formal registration of the ship with that state.

Upon registration the ship acquires rights and duties as a result of registration which vary depending upon the state and the conventions and treaties to which it is party.

The duties include the upholding of the law of the flag state aboard the vessel, wherever she may be in the world.

Quality flags will also provide a recognised reputation for excellence, helping the vessel to avoid lengthy Port State Control inspections in foreign ports, and give worldwide support from embassies and consuls of that state and the protection of its navy.

Statutory regulations are not only produced by the marine administrations of countries, but also the International Maritime Organization (IMO).

While some marine or flag administrations have the ability and knowledge to produce their own legislation, this is not true for the majority of countries. As shipping is an international business an international organisation is needed to regulate statutory issues. The United Nations established the IMO for the purpose of adopting the highest standards concerning matters of safety, navigation, and pollution prevention. The IMO held its first meeting in 1959 and now comprises 165 flag state members.

The United Nations established the IMO for the purpose of adopting the highest standards concerning matters of safety, navigation, and pollution prevention

The IMO’s purpose is to facilitate the general adoption of the highest practical standards in matters concerning maritime safety, efficiency of navigation and the prevention of marine pollution from ships among governments. Since its inception the IMO has introduced 40 conventions and protocols, although it is the responsibility of member countries to put these regulations into effect.

The process of statutory implementation begins with the development and adoption of regulations by working groups at the IMO. Before these regulations come into force they have to have been accepted by a certain percentage of the IMO’s member states. This can take some time as each country has to introduce these statutory regulations as part of their maritime law before they can actually become mandatory on the ships registered in those countries.

It is important to understand that the IMO can adopt international legislation but that it remains the prerogative of the flag state to implement and enforce it. If a yacht registers with a country that has accepted these regulations then the yacht and her operators have to comply with them.

Maintenance of compliance is verified by a regular survey regime, which is the responsibility of the flag administrations and normally carried out by flag surveyors.

Not all flag administrations have the expertise or manpower to carry out the survey regime themselves, and they often delegate this work to classification societies

This arrangement means that the same class surveyor can issue certification on behalf of a flag state for compliance with, amongst other things, the MCA Large Yacht Code and Load Line Conventions. The class surveyor can also handle issues covered by the various annexes contained within the MARPOL Regulations, such as the prevention of oil, sewage and air pollution.

Class surveyors are often empowered by the state to inspect and certify crew accommodation, safety equipment, safety radio requirements, safety of navigation requirements, international tonnage, Suez and Panama Canal Tonnage Certification, and United States Coast Guard compliance. They are also frequently called on to service the requirements of SOLAS whenever a yacht becomes liable to comply with it.

In the preparation of this article the authors gratefully acknowledge the help they received from: