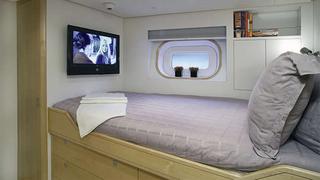 Although the new ILO crew regulations contained within the Maritime Labour Convention 2006 (MLC) were drafted in 2001, many yards, designers and owners have not taken the regulations into account for their new build projects  with potentially disastrous consequences.

The rules, which are due to come into force in August 2013, state that crew sleeping quarters must meet a minimum square footage. However, they were not drawn up with superyachts in mind and may seriously affect guest versus crew numbers for yachts, particularly between 200GT and 500GT, in turn impacting chartering ability.

Unless concessions can be drawn into the convention, yachts with their keel laid from late 2013 will have to conform to these rules. Boat International summarizes what is happening, how you will be expected to comply, and work being done by industry bodies under the radar to work with the ILO. We also print your views on the proposed legislation.

The International Labour Organisation (ILO) is devoted to advancing decent and productive work in conditions of freedom, equity, security and human dignity.

It formulates international labour standards with conventions and recommendations setting minimum standards of basic labour rights: freedom of association, the right to organise, collective bargaining, abolition of forced labour, equality of opportunity and treatment, and other standards addressing conditions across the entire spectrum of work-related issues.

The ILO was created in 1919, as part of the Treaty of Versailles that ended World War One. The constitution was drafted by the Labour Commission, composed of representatives from Belgium, Cuba, Czechoslovakia, France, Italy, Japan, Poland, the UK and the US.

The preamble to the constitution indicates areas of improvements, which are still valid today, for example regulation working hours; prevention of unemployment and provision of an adequate living wage; and protection for the worker against sickness, disease and injury arising out of his employment.

The decision by the ILO to create the Maritime Labour Convention is the result of a joint resolution in 2001 by the international seafarers and ship owners organisations, later supported by governments.

The tenth maritime session of the 94th International Labour Conference of the ILO, which was held in Geneva in February 2006, adopted the Maritime Labour Convention 2006, which contains a comprehensive set of global standards, based on those that are presently in force.

For MLC 2006 to come into force, there had to be registered ratifications by at least 30 members with a total share in the world gross tonnage of ships of 33 per cent.

Unless expressly provided otherwise in the regulations and code, the convention applies to all seafarers; all ships  whether publicly or privately owned  ordinarily engaged in commercial activities, other than ships engaged in fishing or in similar pursuits, ships of traditional build, such as dhows and junks, warships, and naval auxiliaries.

The competent authority may decide not to apply certain details of the code to ships of less than 200GT not engaged in international voyages. Such a decision may only be made in consultation with the ship owners and seafarers organisations concerned and provided that the subject matter is dealt with differently by national laws or regulations or collective bargaining agreements or other measures.