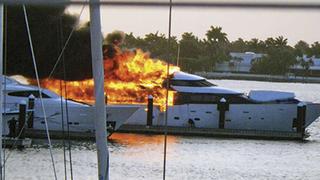 If you were to take a group of experienced yacht captains and ask them what worries them the most when they go to sea, weather might make the list, electronic or mechanical failures could be a concern, piracy might be another, but overwhelmingly, captains are most concerned about a fire on board.

Major fires aboard yachts seldom end well, even if the fire occurs in or near a port. Because of their complex nature created by variables such as thousands of gallons of fuel, structural plastics that become extraordinarily toxic when on fire, and complicated layouts that include multiple confined spaces, boat fires are classed as among the most dangerous types of fires to fight.

For this reason, many fire departments will not board a vessel to fight a fire, unless there is an imminent danger to life. Even the United States Coast Guard (USCG) has a strict policy against crew boarding another vessel in order to fight a fire, which does not present an immediate risk to life.

The most realistic expectation in the event of a fire is that responders will address any life safety risk and then attempt to contain the fire to the afflicted vessel and assist in protecting the environment. Heroic efforts to protect property losses are not typical.

Mitigating losses means your crew needs to react quickly and accurately to keep fire from spreading and becoming a threat to the safety of those aboard.

Although most crew will complete Standards of Training, Certification and Watch-keeping (STCW) Basic Safety Training, which includes a full day of fire-fighting training, it is a dangerous misconception to believe that this is all the training your crew will need.

Todd Kollar, the STCW Fire Training Specialist for the state of Alaska, says, ‘To meet the requirements for STCW, it is possible to complete your fire training in a single day. Up here in Alaska, where just about everywhere is “remote”, in addition to Basic Safety Training, I spend three full days on fire training – a whole day just on extinguishers – and even our intense program would not constitute complete preparation

‘An STCW is not the end of safety training, it’s the beginning. It is meant to give [crew] basic knowledge and an incentive to learn more. The certificate is not a substitute for an on-board plan specific to your vessel, regular drilling and remedial training, which the captain and owner should require.’

‘We certify a lot of individuals for STCW training, but there are not many yacht crew who then come back looking for extra firefighting training,’ says Clifford Charlock, fire school manager for Resolve Maritime Academy in Fort Lauderdale, Florida.

Every year for the last four years, Captain Brad Kitcher and the entire crew of the 51m motor yacht Lazy Z have undergone refresher fire training as a team at Resolve.

‘I was very surprised when Resolve told us that we are the only yacht that conducts extra firefighting training every year as a crew,’ says Captain Kitcher.

Additionally, there are a number of services that will come to your boat and conduct a yacht-specific fire safety evaluation.