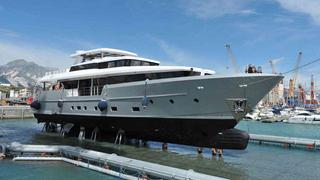 An exciting summer of launches for Admiral Tecnomar has kicked off with the Admiral Classique 35, which hit the water last week in Carrara, northern Italy.

The 35m steel displacement yacht, named Foam, is the first Classique 35 out of Admiral’s sheds and will soon be followed by four other launches by The Italian Sea Group, Admiral’s parent company. Superyacht Foam’s exterior and interior styling comes from the board’s of The Italian Sea Group’s in-house design studio, Centro Stile, in collaboration with the owner.

The battleship hull colouring, white, tiered superstructure and long runs of tinted windows contrast well to create a boat that has a foot in both the classic and modern camps. One very contemporary feature, however, is the bulwark cutaway on each side of the yacht offering guests in the main saloon uninterrupted views over the water.

All the accommodation is found on the lower deck and is made up of two guest cabins, a large VIP, and a full-beam master stateroom, which has double access. The crew area is split between the main and lower deck, with the galley and crew mess forward on the main deck.