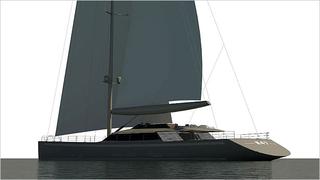 A month ago we published some of the first pictures of Glorious, a 36m ketch-rigged modern gulet recently delivered by Esenyacht. As promised, the Turkish yard is back to present its current project, a 47m sloop sailing yacht, currently known by its hull number E-471.

The project E-471 is an ambitious project, a 47m flybridge sloop built in steel with an aluminium superstructure. The naval architecture is by Ark Yat while both exterior styling and interior design will be the responsibility of an in-house team.

RINA classed and MCA compliant, Project E-471 will accommodate up to 12 guests in a modern-style interior. Guest cabins, aft of the superstructure, comprise a full-beam master, two doubles and two twins plus two Pullmans. The crew of nine will be accommodated in the crew quarters forward.

The sailing yacht will have a carbon mast of 51m and a total sail area of 2,160sqm (including spinnaker). In light wind, she'll be powered by twin 1,000hp Caterpillar engines giving a top speed of 12.5 knots.

Currently under construction, the project E-471 is scheduled to be launched at the end of 2013.