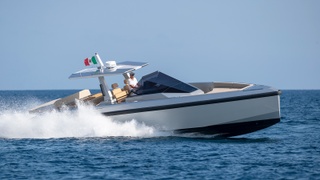 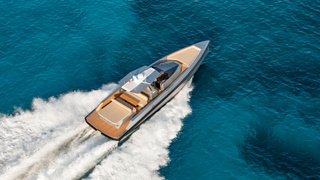 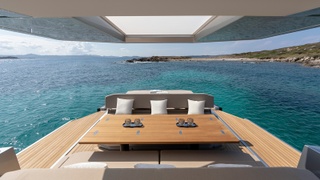 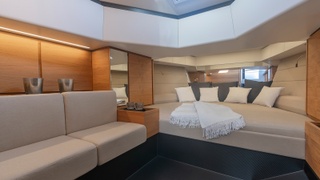 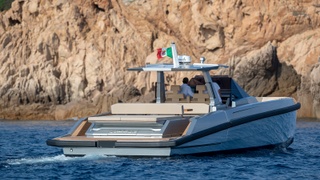 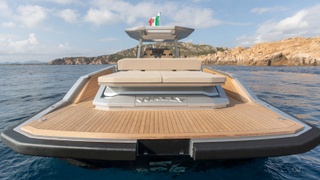 An evolved Wallytender – the first fruit of the newly formed Wally-Ferretti Group alliance – stays true to the brand’s ethos while reaping the benefits of its new parent company. Sam Fortescue steps on board the 48 Wallytender

As soon as Luca Bassani steps up to say hello, I realise I won’t be getting too wet today. The founder of the iconic Wally brand is wearing chinos and a smart shirt, and doesn’t look as if he’s expecting much of a buffeting. And yet, his latest creation, the 48 Wallytender that lies growling dockside in Cannes’s Vieux Port, is an open boat built to provide an exhilarating ride at up to 38 knots.

It closely resembles the successful Wally 47, but this is a brand new hull and deck plan. “It is an evolution of the 47,” explains Bassani. “Our clients have been so happy – we didn’t want to change things too much.” She is bigger, longer and definitely beamier. She is also the first in the line to be optimised for Volvo IPS engines – twin IPS 650s, in fact, totalling 960hp. And the reason for that is clear as soon as we’re all aboard, when a few deft moves of the joystick control have us skipping out of a tight berth.

After the rain and winds of the previous day at the Cannes Yachting Festival, everyone is keen to make the most of the early morning sun. We clear the congested harbour mouth before long-term Wally skipper Carlo Marazzi starts to push up through the revs. The boat tops out at around 35 knots in the modest swell of the Bay of Cannes. And even as we sear a groove through the wake of a Pershing that is also careering around the bay, the boat is astonishingly stable.

The vertical bow serves for “piercing the waves and avoiding slamming in any sea conditions”, according to Bassani. Interceptors on the transom can tip the bow down for better wave piercing and more comfort, or up for maximum pace. There’s a wall of spray on either side, but the 18-degree deadrise and the chine in the hull ensure that none of it comes aboard.

This is just as well, because with a simple interior including a head and a broad V-berth, the 48 Wallytender is really all about day sailing. The emphasis is on a large sunpad at the bow, another one at the stern, and a flexible seating area just behind the helm station. Flip the backrest one way and you have an aft-facing seat for a convivial meal around a teak table; the other way gives you a second row of forward-facing seats for comfortably blatting around at 30-plus knots. There’s also a sink, fridge and a grill or hob tucked under a panel behind the helm. This can be configured however you please to offer what you need to keep guests happy during the day.

As you might expect from Wally, a number of premium features are included as standard. So, the hydraulic passerelle aft also doubles as a swim ladder: just the touch of a button will swing it down under the water. And in a nod to an innovation developed by Wally in 2002, the boat has two fold-down hydraulic wings aft, which add four square metres of sunbathing space. The finish is good throughout, with a neutral teak interior and linen upholstery.

Because this is the first boat to emerge from Wally since it was fully acquired by the Ferretti Group, it is also the first model in a new production regime. Its price tag, at just a fraction under €900,000 (£771,000), also makes it cheaper than previous Wallytenders. But Wally managing director and Ferretti chief commercial officer Stefano de Vivo insists this boat is no guinea pig – the price is purely due to the greater buying power of its parent group. And Bassani, who retains a minority share of the company, is adamant: “For sure, this is the best Wallytender ever built.”

The hull is in GRP with a carbon fibre deck and hardtop to keep the weight down to a respectable 11.5 tonnes (light ship). That’s despite the Seakeeper 6 stabiliser, which stills us magnificently in the swell. Another nice touch is the ground tackle hidden behind a retractable bow panel. Touch a button and the anchor emerges from the bow on a launching bracket.

It is all very identifiably Wally. “Ever since we entered the power market in 2001, the Wallytender has been a symbol of the pure joy of open-air boating,” says Bassani. “The new 48 Wallytender is proof positive that our very special design DNA continues to thrive under Ferretti ownership.” That said, he is excited about the extra depth of the Ferretti Group’s R&D capabilities, and believes that the brand could carry the tender concept up to 60ft (18.3 metres).

Just as I’m about to ask about Ferretti’s plans to diversify away from its core marine activities, the skipper taps me on the shoulder. It’s my turn to take the helm. I cautiously push the twin throttles forward and without my really noticing, we’re soon up to full speed; the ride is that smooth. It takes several full turns of the wheel to put the rudder over to its maximum 23-degree deflection; but even at full pace, she never loses her grip. There are just a couple of moments when you might have spilt your coffee – most with me at the helm and leaping from full right turn to full left. But as we slide back into the marina after a 45-minute blast, we’re all wearing smiles and Bassani himself is still lounging comfortably on the wide passenger seat, as dry as a bone.