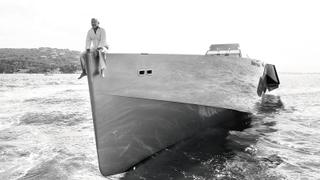 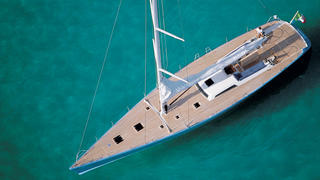 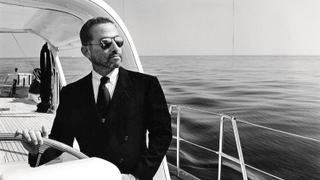 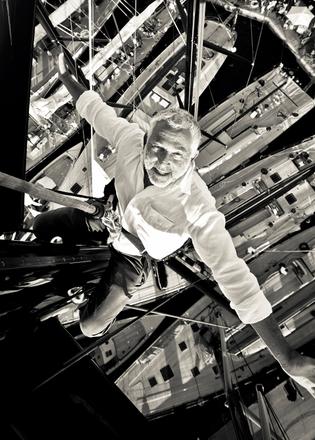 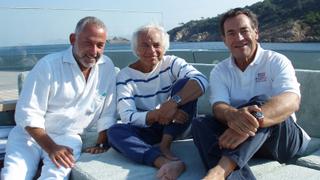 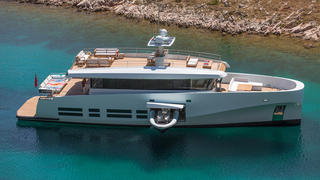 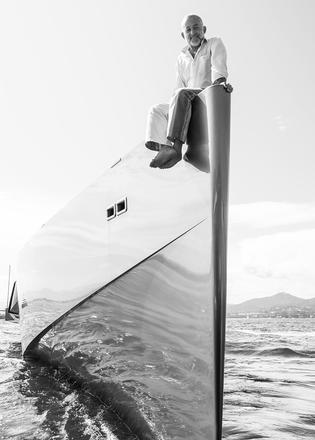 From the moment he launched Wally Yachts in 1994, Luca Bassani has never looked back. Sailers, powerboats, tenders, displacement superyachts – his Wallys are distinctive, unforgettable vessels that have shaped the industry says Stewart Campbell.

If mimicry is flattery then Luca Bassani should spend his entire life blushing. His company, the world-famous Wally Yachts, is one of the few boat brands to go mainstream, like Riva or maybe even Chris-Craft. Car designers will point to Bassani’s iconic WallyPower 118 as an inspiration, and if the sharp, faceted model cruises into port anywhere, the cameraphones come out. His sailing output generates slightly less attention but has had an even greater impact, not just setting trends but a whole new direction for superyacht design.

“You look around the market today and I would say that 95 per cent of yachts from 40 to 140 feet have copied Genie of the Lamp,” Bassani says, referring to the 24.24 metre sloop he launched in 1995. “That kind of layout, that kind of style and deck, it’s clear. I don’t think it’s too much to say that Genie has influenced the last 20 years.” But there’s an obvious flip-side to any new thinking. “I think we’ve deserved to sell more than 46, 47 boats. It’s a good number, for big sailing yachts like this, but I think the market could have trusted us a bit more. When you look and see that everybody is doing the same as us, you say ‘why didn’t you just come to Wally?’”

Those who do choose Wally don’t regret it. We’re dockside at the Les Voiles de St Tropez, weather-bound on board 32.72 metre Kenora. Racing has been cancelled for the day and the Wally fleet is lined up in the heart of town, attracting admiring glances from all who pass. The owners are sitting around their cockpits, hopping from boat to boat, and when Bassani appears from down below their faces light up. Throughout our conversation, meanwhile, the 59-year-old Italian stops to take calls from customers. It’s clearly a connection that doesn’t end with delivery. “The kind of relationship that you are able to maintain with the client is extremely important,” he says, sagely.

There’s definitely a feeling of “us” among Wally owners, which is partly maintained through the Wally Class, which competes in regattas all over the Med. And you can imagine owners of Wally powerboats nodding knowingly as they pass each other in port. When so much is safe and conservative in boat design, it takes a special kind of owner to trust Bassani’s vision. “When we have a new client coming and saying, ‘you know, I would like to have a Wally, but I also like that other brand’, that’s not our client. Our client is someone who comes to us and says, ‘I want a Wally. Finally I have decided.’”

His approach to boatbuilding has lost him orders over the years, he freely admits, but he’ll make those sacrifices to maintain the integrity of the brand. “I’m probably too arrogant,” he says, “but this is my way. Every time I build a boat, I design a bit of it for myself.”

The first boat he ever built was actually for himself. In 1989 he got rich after the sale of the family firm, BTicino, a world leader in electrical components. Well below 40 and with a very deep wallet, he did what most people would do – he went looking for a superyacht. “Finally, after a long period of being very, very busy, for a while I was free, very rich and I said, ‘OK, now I want the boat of my dreams’.”

Finding it was easier said than done. No boat then on the market matched his requirements and nor would any boat designers take his commission. “They were scared to put their reputation at risk in delivering a boat that could be too innovative. The industry was 20 years behind and nobody wanted to progress,” he says. “We are talking about 1989 and first of all I wanted a carbon fibre mast, and at that time the only boat with a carbon fibre mast was the New Zealand America’s Cup boat. I also wanted a forward master cabin, a self-tacking jib and no backstays. The only designer that would listen to me was Luca Brenta. He was young, he was new in the market and he didn’t have anything to lose.”

The boat that resulted from the collaboration was the first Wallygator, 25.3 metres long and super-clean. The angled slivers of glass that illuminate the yacht’s interior and its clutter-free decks were a declaration to a pretty static yacht market: here was something new. The yacht’s name came from the 1960s Hanna-Barbera cartoon of

the waterskiing Cajun alligator forever trying to escape from the zoo. Bassani loved the cartoon and wanted something child-friendly for his young son. The name also handily matched the dark green of his new yacht’s hull.

He spent two years cruising and racing Wallygator, occasionally beating genuine raceboats to line honours. “People started saying, ‘but that’s a cruising boat, with teak and air-conditioning and everything, and she’s as fast as we are’.” Despite the attention, his boat remained apart; Bassani could not understand why no one was copying him. “So I thought I should try to set up a little business to promote this kind of new generation of boat.” And with that, in 1994, Wally Yachts was born, the company capitalising on the name of Bassani’s first boat – “and because our boats would also be a bit ‘wally’!”

It was a neat end-of-chapter in Bassani’s life: a return to the sea. He grew up in Milan but holidayed in Portofino every year, for the whole three months of summer. When he wasn’t sailing on his father’s boat out of the town’s pretty port, he was with his friends. “We would go fishing very early in the morning and then go diving, picking up urchins or starfish to sell in the town square to the few tourists who were coming then, all so we could buy our glass of Coca-Cola. There I learnt everything about the sea and sailing.” He’d also spend time with the pro sailors on their boats, to complete his immersion. He was soon racing himself and, in 1979, introduced the J/24 class to Italy. He went on to win two European championships in the Six Metre class, and placed third in the worlds in 1983. He took gold in the Mumm 30 class at the 1998 world championships and silver in the European championships that same year. His love of competition meant the birth of the Wally Class in 1999 was inevitable.

For most people, though, the Wally brand is synonymous with angular powerboats. Impossible to witness without an instant emotional reaction, these boats exploded into the public consciousness in 2003 when the WallyPower 118 slipped into the water. Part weapon, part spaceship and wholly beautiful, three gas turbines propel the 36 metre superyacht to more that 60 knots.

It changed everything. “It’s probably the best known boat in the world,” Bassani says. “The soul of that design is really, really strong. She looks just like an airplane. She looks like a missile designed to go to the moon.”

The only other boat on the water that Bassani can bring himself to compare to the 118 is Andrey Melnichenko’s landmark Motor Yacht A, designed by Philippe Starck and built at Blohm+Voss. “In my mind that’s the only yacht that is as uncompromised. Everything is hidden, everything is closed. You don’t see any of the menial details and that makes a big difference.” Bassani points to the 118’s upright bow, now a staple of modern superyacht design, as a market-mover. “Today, everyone has ‘invented’ the vertical bow. We didn’t invent it, it was invented in the 19th century, even before that, but when we introduced it in 2003, everyone was against it. Even the naval architects, they were saying, ‘no, this boat will have big problems’. And now everyone understands that there are a lot of advantages in having a vertical bow. And everyone is claiming they invented it!” It feeds into Bassani’s belief that Wally operates ahead of the market but he rejects the idea that his boats are futuristic. “We just want to do something that for decades nobody has done.”

His tenders had a similar impact at a time when the concept of a luxury tender mostly meant a RIB with some canvas up. The first one was launched in 2001, with the range going on to be “very, very successful”, says Bassani. So far 70 WallyTenders have been sold, bringing to 122 the number of Wally powerboats on the water. Bassani doesn’t pen the designs for each himself, instead relying on a team of designers to translate his vision. And at the turn of the millennium, his vision was to revolutionise the tender market. “You know the Cala di Volpe and the hotel with the little harbour? From six or seven in the evening, everyone was coming into harbour to have their drinks at the hotel in little inflatables and I was arriving in the WallyTender. People were thinking, ‘so I have a 70 million euro motor yacht and such a small, stupid tender?’ And they started to buy the WallyTender.” Business wasn’t the only benefit. “Plus at the time I was separated from my wife, so the tender was attracting even more attention…”

The inspiration for his shift into the world of power came from a Mangusta owner. They met in 1999 and the owner told Bassani he didn’t like sailing but wanted a boat with the look of his 27 metre Tiketitan. “That gave me the intuition of how Wally’s powerboats should be designed, because Tiketitan was a very innovative sailing boat and was the first one with a canting keel. It looked like a navy boat, a warship, but one with sails.”

The industry needs brave owners like this, he says. “When you invest so much money, you have to do something important.” But there aren’t too many of them around, he admits; people like to keep things a few degrees either side of normal. “That is humanity and humanity doesn’t easily change,” he sighs. And that, fundamentally, is why Wally hasn’t sold more boats.

But Bassani won’t be stopped, or compromised. In fact his most recent output suggests his focus remains as sharp as ever. The fourth hull of the WallyAce series has now been launched. His first attempt at a displacement superyacht was greeted, like the rest of his output, with open mouths when hull one appeared in 2012. “They’re extreme boats but extreme in terms of comfort and energy consumption. That boat is very, very efficient.” Bassani read the wind and decided the future was green. Always ahead of the game.

On board with Raffaele Costa, owner of superyacht Sea Force One