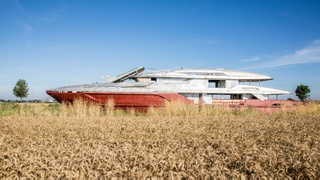 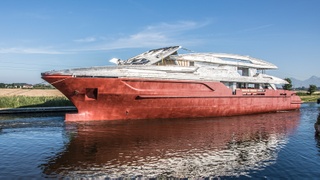 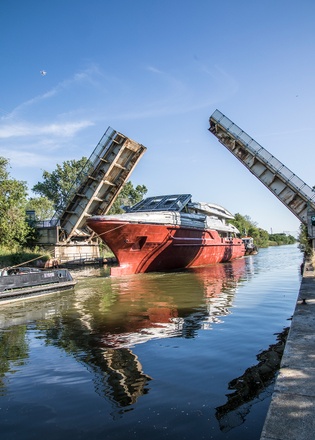 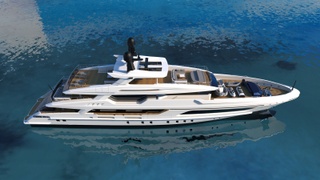 It comes after the yard announced in August that the yacht had arrived at its La Spezia facility for outfitting. Hull 10233 is the sistership of superyachts Andiamo and Silver Fox, and the third in Baglietto’s flagship T-Line series.

Exterior design comes courtesy of Francesco Paszkowski Design, who has worked closely with the owner. Baglietto described the owner as having “great knowledge and expertise in yachting”.

The pair have “worked closely together on adding stylistic and functional improvements that enhance the value of a well-established platform," the yard said. The yacht is due for a spring 2021 delivery with the entire project being overseen by the New-Build Division of Camper & Nicholsons Inter national.

Built with a steel hull and aluminium superstructure, the yacht offers “impressive volumes and unique outside areas” said the yard. The 140 square metre sun deck features a swimming pool at the stern surrounded by sun beds, as well as a lunch area, with a coffee bar, barbecue and refrigerator. This area is directly connected to the galley via a dumb waiter.

Forward of the sun deck, there is a sunbathing area with 360-degree ocean views. A specific request from the owner has seen the inclusion of a crystal lift connecting all decks of the yacht, including the sun deck.

The third hull will have a different upper deck layout, which gives more space to the skylounge. This extends outside to create a winter garden and includes a dining table capable of seating 12 guests.

The lower deck layout meanwhile will have two large double cabins that can be transformed into four double cabins thanks to a sliding partition wall - this was another specific request from the owner.

The 46 square metre beach club meanwhile includes a spa with a fully equipped gym and steam bath. The tenders and two jet skis sit at the bow.

Power will come from twin MTU 12V2000M72 engines offering a maximum speed of 15 knots and a cruising speed of 12 knots.