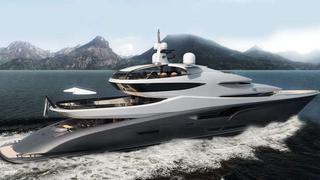 The yacht features an eye-catching pod-style balcony on the top deck, with a continuous, glazed insert around the bulwark for a panoramic view to the sea below. Elsewhere the design is marked by sweeping lines that run back in dramatic scoops and arches. The purposeful front end boasts heavy overhangs on the bridge and main deck saloon windows.

The aft end of the 96 metre superyacht is also characterised by a long overhang above the rear deck, giving shade and privacy as well as complimenting the dramatic run down to the bathing platform of the transom.

The eye-catching lines enclose a luxurious interior, with a pool aft on the mid-deck, part of a sunbathing section overlooking the yacht's wake. The sundeck on the top level boasts a large jacuzzi and sunbathing section at the forward end, while in the cool of the sunroof stands a bar. The pod-style balcony to the rear of the sundeck is covered by a retractable sun visor, with more sunbeds there too. Elsewhere the concept includes a helipad, large tender garage, movie theater and a beach club.

Previously known as Noddesign, the design house has recently rebranded to become Yildirimemredesign, or YED.