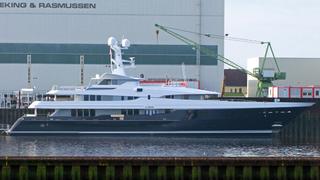 Activity never stops at the Abeking & Rasmussen yard. The impressive motor yacht, the 78.43m Titan was delivered on October 26th, and few days later hull 6482 is launched. Her name is Kaiser.

With a length of 60m, Kaiser is the sistership of Elandess (2009), both yachts having the same designers: Donald Starkey for the exterior and Bannenberg & Rowell for the interior.

Little is known about this superyacht at the moment, but we can say that Kaiser is Lloyd's classed, built in steel and aluminium, has a gross tonnage of 1,090, and her twin diesel engines will give her a maximum speed of 16 knots and a range of 4,000 nautical miles at her cruising speed of 14 knots.

Kaiser will be delivered during the first few months of 2011.