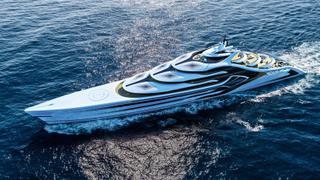 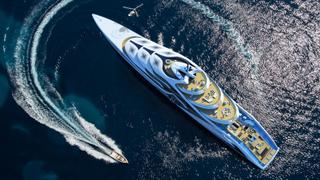 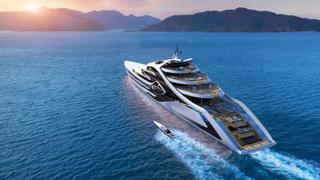 Designed to create a vast amount of interior space, Waugh predicts that Acionna could accommodate almost any desired feature, from a full-size squash court – undoubtedly a nod to the much admired padel tennis court on Aviva – to a helicopter hangar or 20 metre indoor pool.

Included in her eight decks is a double-height main saloon with panoramic curved glass windows overlooking a U-shaped main aft deck pool with two cascading waterfalls. This bathing area leads down to the swim platform and offers a highly original arrangement which sees an ‘island’ of social spaces, including lounge and dining areas as well as two bars, surrounded by the pool and accessed via a tunnel aft and a bridge forward.

“Acionna is the ultimate world cruising megayacht and challenges many of the preconceptions about larger yachts”, says Waugh. “Her avant-garde styling is a feast-for-the-eyes from every angle, exaggerated by her elegant proportions and sheer scale.”

Designed for long distance cruising, Acionna’s power will come from a hydrogen propulsion system, rather than traditional battery powered electric systems which would require regular recharging. It also allows the yacht to be considered ‘zero-impact’ if a renewable source of energy is used to manufacture the hydrogen. However, this kind of technology is still being developed with only a few marine hydrogen facilities in the planning stage.

“The concept is for those who see themselves as trendsetters and game changers, those who appreciate the zenith of luxury but also want to have a positive impact”, added Waugh.

Andy Waugh has become known for his boundary-pushing yacht concepts which, in recent years, have included 45 metre Revolution and 90 metre Nouveau.

A model of Acionna is set to be unveiled at Monaco Yacht Show in September 2018.