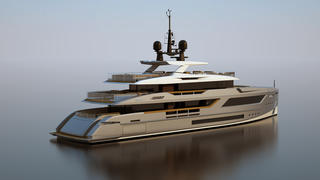 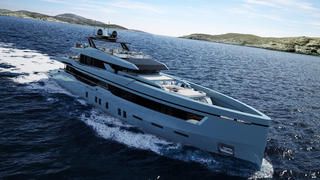 Italian boat builder Baglietto announced today (September 29) at Monaco Yacht Show that it will build a new line of superyachts will be between 40 and 50 metres LOA.

Francesco Paszkowski Design and Hot Lab were tasked with developing two concepts for the first yacht in the line – the Baglietto 44m. “We have asked two great designers to give shape to Baglietto's future while never losing sight of the unbreakable bond with its history and its identity," explained Baglietto general manager Michele Gavino.

The Francesco Paszkowski Design option, shown above, includes a hidden 22 metre sun deck, a beach club, a spacious master cabin and a guest area that can be converted into a suite thanks to modular adjoining walls.

The exterior of the Hot Lab version, shown below, features a high, vertical bow and a slightly forward-tilted windshield and a large garage door that converts into a comfortable platform. Inside, there’s a full-beam master suite that is flooded with light by a skylight and has a balcony forward.

Gavino added: “This is part of a far-reaching renovation process, which started off with the 46 m Fast and aims at bringing the 'seagull brand' closer and closer to market demands, while also preserving its strong personality and Baglietto's unique style."

Baglietto also announced at the boat show that they would be investing a further €12 million in the next few years. This cash injection will allow the yard to build a 3,600square metre dock, add an industrial shed for vessels up to 65 metres long and expand its research and development. This comes after €20 million was invested in the previous four years to construct two industrial sheds and upgrade its entire production facility.