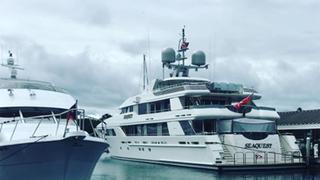 The 49.9 metre Westport superyacht owned by US education secretary Betsy DeVos was deliberately cut loose by vandals last week, sustaining thousands of pounds worth of damage.

The Westport 164 Seaquest is one of 10 luxury yachts owned by billionaire DeVos who is Donald Trump’s education secretary. Police believe the yacht was intentionally set adrift at 6am on Sunday July 22. The yacht drifted from its mooring on Lake Erie at Boat Basin, Ohio and collided with the dock, causing large scratches estimated to cost around £7,000 to repair.

Police are now reviewing surveillance footage to identify who is responsible for untying the yacht.

Delivered in 2008, Seaquest has a top speed of 24 knots and a maximum cruising range of 3,700 nautical miles at 12 knots. She accommodates 12 guests and 13 crew members and was designed by Donald Starkey with William Garden developing the naval architecture.