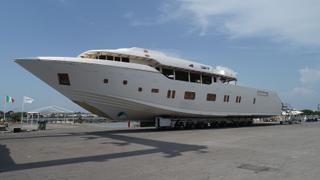 Italian yard Canados has given a construction update on its first Oceanic 140 tri-deck explorer yacht.

The deck of the 42.7 metre yacht, which has been in construction since being sold in 2014, has been installed and work is underway on the superstructure.

The bulb is set to be installed in early September after which the boat will be towed to the completion shed where work will start on the lower deck bulkheads and flooring.

Work on the fairing on the hull and main deck bulkheads will then begin, before the upper deck superstructure is installed in March 2020.

The yard also revealed it will wait until the boat has sold before it decks out the engine room, leaving the choice of twin or triple CAT or MTU engines to the owner. The yacht will be capable or 18 to 26 knots, depending on the power package.

The yard previously announced that Rome-based designer Michela Reverberi will handle the interior. This will feature an owner's suite spanning the entire upper deck including panoramic views, a secluded terrace and private dining area. The flybridge will have a bar, sunpads and a full bathroom.

The hull design is by Arrabito Naval Design in collaboration with the shipyard's chief naval architect Giovanni Senatore. It will feature a twin-stepped hull, designed to reduce friction and a bulbous bow.

It comes after the yard announced it was planning a range of fast Oceanic explorer yachts in November 2013.