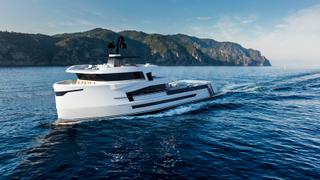 Italian yard Cantieri Navali Chioggia has released the first details of its latest concept, the Naucrates 130.

Developed in collaboration with Italian studio Green Yachts, this 40 metre steel-hulled yacht has been designed to offer a tranquil cruising experience even in rough sea conditions. The yard explains that the Naucrates 130’s wider than average 10.26 metre beam and high bow make this possible.

Green Yachts’ influence can be seen in the bevelled surfaces, recessed windows and geometric lines, which combine to give the Naucrates 130 a deceptively slender look.

Further al fresco relaxation is offered on the superyacht sundeck with a large C-shaped sofa situated aft, a central bar area shaded by a hardtop bimini and space for freestanding furniture forward.

Moving inside and accommodation is for up to ten guests split between five staterooms, including three VIP suites and two double cabins. The interior décor is highly customisable and the yard has approached three studios to develop different options.

Power would come from a pair of 1,300hp Caterpillar C32 diesel engines for a top speed of 14 knots. When trimmed back to an economical cruising speed of eight knots, the Naucrates 130 would be capable of a transatlantic cruising range of 5,000 nautical miles, drawing on a total fuel capacity of 170,000 litres.