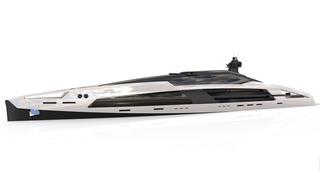 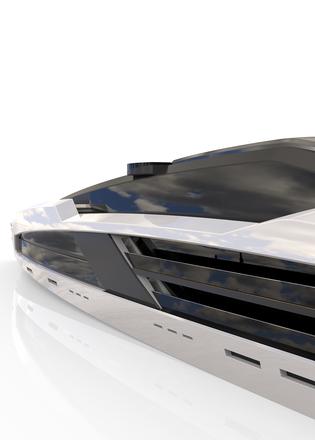 Florida-based designer Facheris has unveiled its latest concept, the Aqueous 120.

The studio, set up by Patrizio Facheris, former chief designer at Michael Peters for 13 years, said that the Aqueous 120m created a “subtle accord between generous dimensions and a fresh profile”.

Facheris said the process used in the creation of the Aqueous 120m was the same as used in car design and styling. The proportions and aerodynamics of the design were assessed through modelling to achieve a silhouette that the studio describes as “the driving force behind the passion and emotion of the superyacht”.

The Aqueous 120m offers an impressive 400 square metre after deck that includes a large infinity pool, a retractable awning covering part of the deck and a double-lounge seat and bar. Integrated are two large garages holding two 11-metre limo tenders, a jet ski, and additional leisure equipment to enhance the ultimate yachting lifestyle.

The forward deck includes a large sun pad and Jacuzzi, these days considered integral features for on-board relaxation and entertainment.

A notable design feature of the Aqueous 120 is what Facheris describes as the “transformative capacity” of the sun pad, which can be turned into a helicopter landing pad.m

The Aqueous 120m concept also promotes a generous use of glass, which features prominently throughout the superstructure and hull, maximising the amount of natural light permeating each cabin, as well as the salon and entertainment spaces. Facheris says that this expansive visibility creates a synergy between the interior and exterior worlds.

The Aqueous 120m will be powered by a hybrid propulsion system, which will result in fewer emissions.