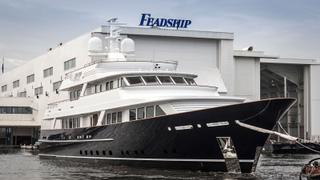 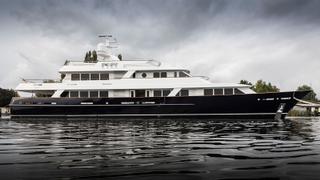 The 47 metre Feadship motor yacht Project 697 was launched over the weekend (October 21). Built for an owner who wanted to revisit the classic era of Feadship but with all the latest technological benefits, this tri-deck displacement yacht features a steel hull finished in Midnight Blue and a Matterhorn White aluminium superstructure.

In a statement, Feadship explained that her styling was inspired by the 1992 launch Aurora B, which recently completed a refit at the Dutch yard. Exterior detailing in stainless steel and lacquered teak handrails add to the vintage aesthetic, which was created by De Voogt Naval Architects.

The interior designer has not yet been disclosed but the yard comments, “The traditional design is enriched by the interior architect, who added several subtle contemporary touches such as large windows and bright, open spaces."

Key features include a walkaround deckhouse and subtly curved gunwhales, which help to create an elegant profile. Al fresco relaxation options are plentiful with exterior seating areas on the main deck, upper deck and superyacht sundeck.

Very few details are known about the interior of this modern classic yacht, with the total accommodation and layout still unclear, however, it is understood that the drivetrain consists of two 1,450hp MTU 12V200 M72 diesel engines.

Other superyacht projects currently under development at the Dutch yard include the 69 metre Samaya, which was launched last month and is due for delivery before the end of the year.