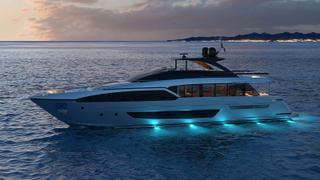 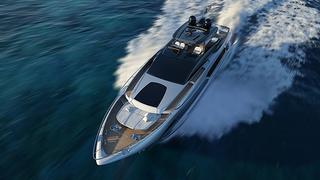 The Ferretti Group has debuted its Riva 90 Argo flybridge yacht ahead of the Palm Beach International Boat Show.

The model, which is the newest addition to the Riva line, was presented at an exclusive event on March 9 at Miami's Zuma Japanese restaurant. The model slowly made its entrance with all lights ablaze to the opening beat of Queen's We Will Rock You and spun under spotlights before docking between the also present Riva 66 Ribelle and Riva 100 Corsaro.

Speaking at the event, Ferretti Group chief executive Alberto Galassi said: "The Riva company is 177 years old and we launched the Riva Corsaro in Hong Kong, we launched the 110 Dolce Vita in Monte Carlo and we decided it was the right time for America to have the world premiere of a beautiful boat like this one."

He went on to explain that the name of the model has its roots in Greek history. "The name Argo is a mythological name that dates back to the Ancient Greek city of Argo and the legend of Argo," he said. "There is brain and there is man behind this. Mauro Micheli, together with Sergio Berretta, who has designed Rivas for a lifetime, have designed this beautiful boat."

The Riva 90 Argo was developed by the Ferretti Engineering Department working in close collaboration with the Officina Italiana Design studio.

Key features include a generously sized superyacht sundeck and a wide-body owner’s cabin situated on the main deck. Aft, the Riva 90 will inherit the concealed stairway system from the Riva 56 Rivale, while the tender garage is large enough to accommodate and independently launch a Williams 395 and a Jet Ski.

Speaking last year, Mauro Micheli, chief designer at Officina Italiana Design, said: “The Riva 90 is a very sleek, slender boat despite being quite large, volume-wise. Its lines are balanced, sporty and elegant, brilliantly epitomising the Riva DNA. There is a real sense of stylistic coherency between the interiors and exteriors.”

Likewise a wide range of layouts will be offered, with the option to fit up to five guest cabins onto the lower deck.

Sergio Beretta, CEO of Officina Italiana Design, previously said: “It is not designed for any specific sea — it’s perfect anywhere. That said, we believe that the Riva 90 will be particularly popular in the East because of its modern, edgy style.”

The premiere comes just a few months ahead of the presentation of the Riva 50m flagship, which is currently under construction in Ancona, Italy. Following the debut, the Riva 90 Argo will proceed to the the Palm Beach International Boat Show, where it will be on display from March 28 to 31.