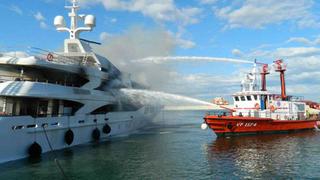 Fire on superyacht at Benetti shipyard

A fire broke out on a superyacht at the Benetti shipyard in Livorno, Italy, at 7:45 a.m. today.

The fire took place on a yacht moored outside the yard, which a source close to the yard who wishes to remain anonymous has confirmed to be the 56m Benetti FB261. The yacht had been completed with interior by Bannenberg & Rowell and is reportedly listed for sale.

Four teams of firefighters, with the help of the nautical team forces who approached the fire from the sea, plus Svs volunteers, extinguished the flames. It seems no one was on board the yacht at the time of the fire and no injuries have been reported and damage is said to not be severe. The cause of the fire is under investigation.

Video of fire and smoke engulfing the Benetti yard is found below. Stay tuned for more photos from a photographer on the scene.