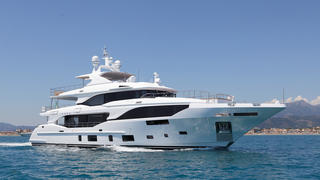 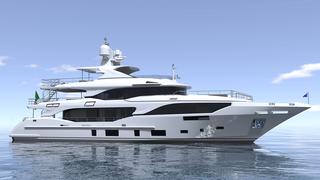 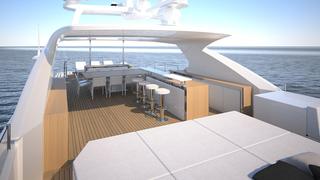 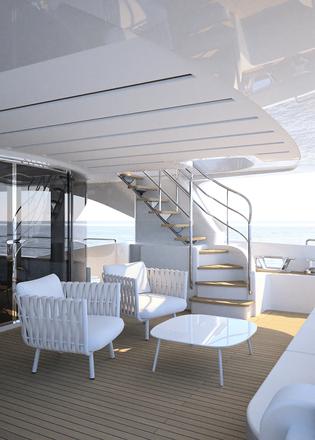 The first hull in the Benetti Mediterraneo 116 superyacht series has been launched for a US owner and named Oli, the Italian yard has announced.

Benetti introduced the Mediterraneo 116, the newest model in its Displacement Class range, at the Cannes Yachting Festival in September 2015. The 35.5 metre yacht marks a new direction for Benetti, with exterior styling by Giorgio Maria Cassetta.

“It’s very much connected to the roots of the displacement class, while opening the door too a new era,” Benetti said.

One forward-looking design feature is the extensive use of carbon fibre. The exterior design is sleek and slender, and the decks are designed to flow seamlessly into one another.

The cockpit on the Mediterraneo 116 is notably wide at six metres, and three metre tall crystal doors open into the main saloon. This interior space is designed for entertaining, welcoming up to 12 guests. Full-height, frameless picture windows should give great views out to sea, while the total interior volume of 271GT.

The exterior lines have kept the classic Benetti proportions, such as the standard lower deck layout with four twin cabins – two VIPs and two twins, each with their own en-suite. The guest cabin portholes have been updated, though, with 1.6 metre windows bringing in light and incredible views right at the water level.

A superyacht swimming pool is specified as standard on the foredeck, but Benetti says that this area is customisable. Other exterior spaces include a sun deck that measures 80 square metres and is linked to the cockpit by a curved superyacht staircase.

The displacement hull will be fitted with twin 1,400hp MAN V12 diesel engines for a top speed of 15 knots, while the 33,000 litre fuel tank gives a cruising range of 3,000 nautical miles.

Benetti plans to exhibit the first Mediterraneo 116 in September at the 2016 Cannes Yachting Festival, while hulls two and three are already in build.