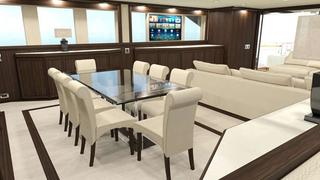 First look at interior of in build Filippetti Navetta 30 superyacht

Italian yard Filippetti Yachts has released renderings of its 30m Navetta superyacht, due to be delivered to her owner at the beginning of June this year.

The Navetta 30 superyacht is under construction at Filippetti and is the builder's newest addition to its Green Series of yachts. The newly released renderings show a traditionally-styled Navetta yacht with a modern, contemporary interior. Extensive use of American walnut wood and ivory leather creates pleasant effects of light and shadow, without appearing to be too minimalist or stark.

This is the first Filippetti Navetta to be offered in a fully customised version, and as such it features six cabins and a revised layout to the standard Navetta 30. On board, a series of original design solutions have been adopted, resulting from the owner's wish for personal space and to accommodate a large number of guests. Filippetti Yachts has added an extra cabin, compared to the standard version that features five. Thanks to its specialised design team, Filippetti Yachts says it is able to satisfy every request, in order to create and exclusive and unique boat in accordance to the owner’s taste.

The Filippetti Navetta 30 will be officially presented during the next edition of the Yachting Festival in Cannes Boat Show in the autumn of 2014.