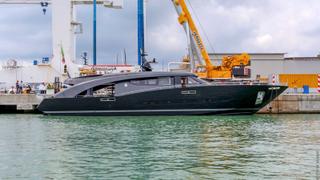 The yacht is the latest in CCN’s Fuoriserie collection and hit the water at a ceremony attended by her owner. She is set to appear at the Monaco Yacht Show.

Sold in an in-house deal back in May 2017, Freedom has an aluminium hull and superstructure.

Cavalli's friend and fellow designer Tommaso Spadolini took care of interior and exterior styling. The brief called for a strong exterior profile to reflect the owner’s strong personality. The yard was challenged with maximising contact with the sea while ensuring that privacy is not compromised.

This has resulted in the aft cockpit being fitted with concealing curtains to ensure maximum privacy.

Speaking last year, yard CEO Diego Michele Deprati, said, “It is a great honour for me to be able to build a yacht that will truly stand out for its great personality and unique features. The Fuoriserie philosophy is undoubtedly bound to become the distinguishing feature of our shipyard.”

Accommodation is for six guests split between a full-beam main deck owner’s cabin, situated just behind the helm station, and two staterooms below decks, adjacent to the crew quarters. Other key features include an upper deck helm station and a large cockpit with concealing curtains.

Power comes from a triple waterjet drivetrain to give Freedom a top speed of 40 knots.