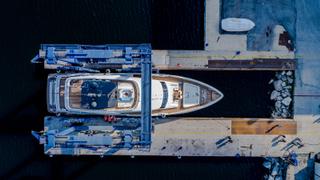 The fourth Custom Line Navetta 33 motor yacht has been launched in less than a year since the new model debuted. The 33 metre is the second yacht in the Custom Line's semi-displacement series after the Navetta 37.

The first Navetta 33, the modern marvel Telli, was built for Ferretti Group CEO Alberto Galassi and debuted in the summer of 2017. The series has proven successful for the Italian builder. Now hull 10 is under build, and the series already has nine owners.

The yacht was launched at Ferretti Group's yard in Ancona, Italy. The Custom Line Navetta 33 is the result of collaboration between the product strategy committee led by Piero Ferrari, Studio Zuccon International Project who designed exteriors, Custom Line Style Department who styled the interiors and Ferretti Group's in-house engineering office, which was responsible for the naval architecture.

The Navetta 33 is a semi-custom series that was designed to offer a combination of comfort and volume with a wide-body superstructure and high-tech systems – packing as much of this into a 33 metre yacht as possible.

The master suite spreads out over the full-beam on the main deck, and the four guest cabins on the lower deck are equally spacious.

Interiors on this Navetta 33 are decorated with darker colours and Alip Lignum veneers. Luxury interior brands are found throughout, including Missoni, Paola Lenti, Roda, Ethimo and Poltrona Frau, to name a few.

Also notable in the Navetta 33 is her hull design, which is the result of extensive R&D and CFD testing. The semi-planing hull design is meant to offer owners looking to step from a planing to a displacement something in between. The semi-planing hull, with a bulbous bow, is designed to be highly efficient. She has a top speed of 15 knots and cruises at 12. Stabilisation is aided by Seakeeper ABT TRAC (underway and zero-speed) stabilisers.