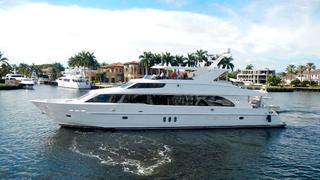 Hargrave Custom Yachts showcases the versatility of its new Jack Sarin-designed semi-displacement composite hull form with its latest delivery, a 101 raised pilothouse motor yacht named Sassy, shown to the public for the first time on opening day of the Miami Yacht & Brokerage Show.

The fourth yacht commissioned by her American family from Fort-Lauderdale, Florida-based yacht builder Hargrave, Sassy features a different profile, a different deck layout and a totally new transom style from her near-sister that was showcased at last fall’s Fort Lauderdale International Boat show.

The new 6.4m wide hull is designed to be fast – boasting a 22 knot top speed on a pair of 1700hp Caterpillars – and run smooth in big seas, delivering an 18 knot cruise at 2,000 rpm. The yacht also shows the yard’s finesse with a new interior joinery material, European cherry, which has a similar grain pattern to its American counterpart but a lighter, blond colour that complements both creamy marble and deep burls, as well as the teak floor in the spacious country kitchen forward. The contemporary, four-stateroom interior is designed by Shelley DiCondina.

Sassy showcases the crisp, superstructure shapes and large rectangular windows often featured by the builder’s design team, but at the owner’s request new transom shaping ends the hull, transom and flybridge deck in a cascade of graceful curves that maximize the living spaces within the LOA. Instead of a pantographic stern door to the lazarette and crew area, this model features a powered lifting door that preserves more of the swim step space. Her knowledgeable owners also requested an enclosed circular staircase to the crew quarters from the aft deck.

Topsides, the yacht features two bars on the massive sun deck, one wraps around the aft side of the spa tub, while the other is integrated into the dining area under the flybridge hard top.