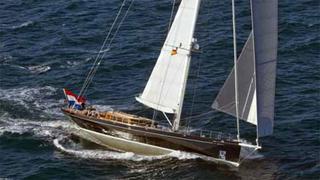 ‘The Pilot Classic concept is based on a 36-footer we did called Tintel – and originally on the British pilot cutters, with plumb bows and bowsprits,’ says Hoek Design managing partner Ruurt Meulemans. ‘It gives the classic looks of the boats but it enlarges the waterline length, and with that the sailing performance.’

Pilot Classic-style designs by the yard are being brought to life in a number of other yards. A 46m is in-build at Royal Huisman, a 20m is under construction at Metur in Bodrum and a 10m day-sailer is being built as part of a series at Dutch yard Jagt.

On Windhunter, Hoek Design was responsible for the naval architecture, exterior styling and interior design of the yacht.

The 26m sailing yacht offers outstanding performance, flush decks, a plumb bow for a long waterline and the ability to be sailed and maintained by a permanent crew of two. The yacht is classically styled above the water, with a lifting keel that stays below the interior floorboards in order to reduce draft for marinas. Carbon spars were chosen and the yacht is expected to be fast in light airs and in upwind conditions.

The interior design was arranged by the Hoek office with soft furnishings by Esra Gunray from Istanbul. The decorative scheme combines mahogany panelling with off-white painted areas and leather floors with mahogany margins. The full-beam owner’s cabin is located aft and features ‘his & hers’ en suites, the latter with a bath. Hoek Design’s ‘Pilot Classic’ concept is also currently being brought to fruition in even larger sizes in major custom builds at Royal Huisman.

Windhunter is the sixth yacht from the boards of Hoek Design to be built at Aluboot, which specialises in aluminium sailing yachts and lifting keels.