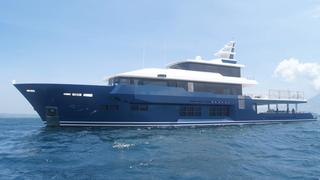 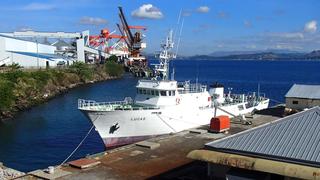 From fisheries vessel to explorer yacht: Cklass is delivered by HYS

HYS tells Boat International that Cklass has been delivered to her owner and will be based in Subic, Philippines for the next three to four months while the crew finish readying her. It is anticipated the owner will keep her in Southeast Asia for at least one season.

Recently finishing her sea trials, HYS reported that, “All systems worked very well during trials, including the TRAC STAR zero speed fin system, TRAC fwd and aft thrusters. The main engine was surveyed by Niigata as running perfectly, and she achieved 14 knots.”

The steel and aluminium explorer yacht was previously known as the Sakae Maru and before her retirement in early 2011, she spent many years cruising the Japanese coast as a government fisheries training vessel. HYS specializes in refits and restorations of ageing commercial vessels, turning them into privately owned superyachts.

HYS saw that the Sakae Maru’s sturdy build and high-level condition, due to regular professional maintenance over the years, would be well suited to long-range passage-making. They purchased her shortly after she was released from government service, with the aim of refitting her as a luxury expedition yacht for a private owner. The owner decided on his fit-out and functionality requirements and the conversion process began in April 2013 and was finished in May 2015.

The newly christened Cklass includes a 45 square meter owner's penthouse with Jacuzzi, situated forward, an open-air lounge aft, a stunning 60 square meter saloon, a bar, formal dining and kitchenette area. There is also a 30 square meter al fresco dining deck, a helideck and an outdoor entertainment platform. The boat also features a gym, a cinema, four en-suite guest suites and a large tender deck which when clear of tenders and other toys can double as a beach club lounge area with fold-out water-level side terraces.