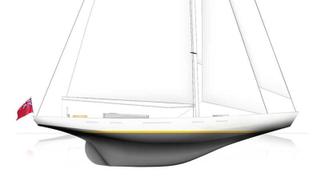 The Jack G100 yacht design will be presented during the Cannes and Monaco yacht shows next month by the fledgling studio, which launched this summer.

With a 6.7 metre beam and 100 tonne displacement, the yacht will be powered by a Volvo Penta DA-300 engine for a top speed of 12 knots under motor.

The yacht will feature four double en suite cabins for guest use and can accommodate a crew of three across one single and one twin cabin. The yacht will also feature dining and entertainment areas above and below deck.

Gifford described the concept as “bringing together origins of style in design and innovation while producing modern performance.”

He added that the studio will focus on driving environmental change through design choice, in both this concept and future designs.

“In our view, the default selection of tropical hardwoods on yachts must come to an end with the thoughtful use of more elegant and practical modern-day materials,” he said.

He added that Diesel propulsion “need not be an inevitability if all options are given equal consideration for each and all designs.”

The studio has also revealed its first tender and chase boat concept, the G40.

The 11.95 metre tender features a deep V hull and will have a top speed of 40 knots and cruising speed of 20 knots. It will also be presented at the Cannes and Monaco yacht shows.