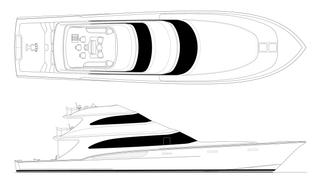 American yard Jarrett Bay Boatworks has given sportfish yacht lovers a glimpse of what its flagship yacht could look like, with the new JB110 concept.

Measuring 33.75 metres, this new design would easily surpass the yard’s current 27.43 metre flagship yacht Jaruco, which was delivered in December 2017. The JB110 concept inherits the yard’s signature exterior styling, with sleek lines and sporty raked windows hinting at speedy performance out on the open water. Vital statistics include an 8.38 metre beam and a maximum draught of just 1.75 metres - ideal for shallow water cruising.

The superyacht sundeck is likely to prove a popular spot with five forward-facing armchairs situated forward of the triple helm position. On the deck below, the JB110 sports an enclosed bridge layout with an L-shaped settee and two built-in benches alongside the main helm station.

The main deck is a highly sociable space with an open-plan dining area/galley and a large C-shaped saloon back aft. Toy storage has also been thoroughly thought through with enough room in the foredeck locker for a tender, two Jet Skis and a pair of bicycles.

Of course, any self-respecting sportfish yacht wouldn’t be complete without a spacious cockpit and fighting chair, and the JB110 is no exception - this key area measures 25 metres square.

All accommodation is situated below decks with room for eight guests split across four cabins, including an owner’s suite in the bow, two twins and a double, while the crew quarters is situated aft of the engine room and allows for a two-person staff. An amidships breakfast bar completes the layout on this level.

Power would come from a pair of MTU 16V4000 M94 engines, while the total fuel capacity of almost 22,000 litres should ensure that extended cruising is possible.