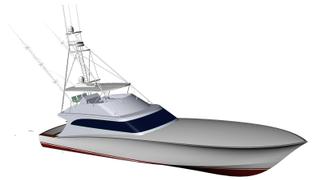 US builder Jim Smith has begun construction on a 29.8 metre custom sportfishing boat, which will be its second biggest build yet.

Ovation will be the largest convertible built by the yard and second biggest build after the 32 metre, five stateroom custom sportfish Marlena.

Details about the boat remain sparse, but it is known that there will be five staterooms. An entertainment centre with a stereo system and TV will sit in the saloon, which will be accessible through an electric sliding door.

A full height fridge-freezer will sit in the pantry along with a wet bar, wine cooler and Asko stainless-steel washer and dryer. The flybridge meanwhile will be equipped with a custom designed helm console.