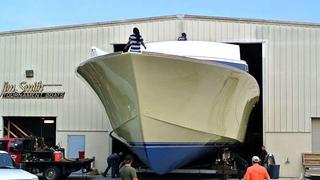 The 32m, five-stateroom custom sportfish, which will be named Marlena, will have a top speed just shy of 40 knots, thanks to her construction and naval architecture. Outfitted with a Seakeeper M6000 gyro stabilizer, she was built for a sportfishing enthusiast who entrusted his previous sportfish, a 95-footer also named Marlena, to Jim Smith. The new yacht will cruise at 27 knots and top out at 39 knots.

A new-yacht launch is always an event, but how many new yachts can claim to have had their own police escort? After 31 months of construction, Jim Smith Boats’ John Vance, who took over the boutique shipyard from its founder in 1989, had to focus on a new task—planning logistics for the 105-foot yacht’s nearly four-mile trek to the Stuart, Florida, waterfront. As the crow flies, the marina is only about half a mile away from the shipyard, but due to her imposing size, the yacht had to take a more circuitous route.

After final touches by interior designer Elizabeth Dalton who worked closely with the owners, the new yacht will head for a summer in Montauk, New York.