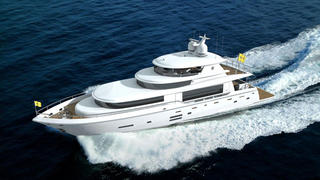 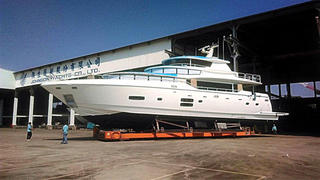 As with every Johnson yacht, exterior styling is courtesy of legendary British designer Bill Dixon, and the 93 features the Johnson range’s signature dual-level vertical windows.

The Johnson 93 has been built on spec with a fibreglass hull and superstructure. The yacht will be displayed at this year’s Fort Lauderdale International Boat Show (November 3-7).

Key features include an on-deck master suite, which gives the owner a 270-degree view from the wrap-around windows, while the broad beam of 7.18 metres allows for a roomy interior with light wood panelling and extensive mirrored surfaces.

Based on the outgoing Johnson 87, but with an extended bathing platform for storing larger tenders, the new arrival is equally well suited for city cruising or island hopping.

The layout includes three guest cabins below decks, including a full-beam amidships VIP cabin, as well as two crew cabins back aft. The first hull has been built as a flybridge version with enough space to fit a fire pit back aft, but a skylounge version will also be made available.

Power comes from a pair of 1,925hp CAT C32 engines for an estimated top speed of 18 knots, while the 15,000 litre fuel tank should give the Johnson 93 an impressive cruising range at its cruising speed of 16 knots.

However, the Johnson 93 is not the flagship in the Taiwanese range, an accolade that goes to the 32.56 metre Johnson 105 Diamond Girl, which was launched in 2007.