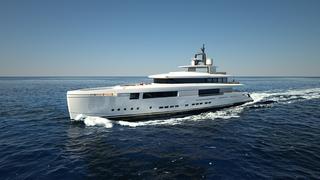 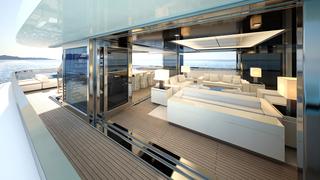 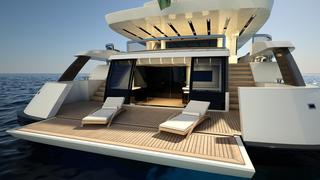 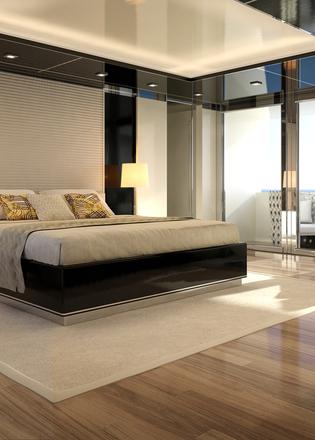 The yacht, which has an exact LOA of 49.2 metres and a beam of nine metres, is designed with convertible exterior living spaces that can blend seamlessly into the interior.

At the stern, for instance, an expanse of glass opens from the inside beach club to the stern platform, which lowers creating an on-water oasis.

The upper deck skylounge is another convertible space, conceived as an enormous “veranda lounge” which can be fully enclosed and air conditioned or fully opened thanks to sliding glass doors.

The interior design of the new Mondomarine M50 Aria is yet to be determined, but the yard says she will accommodate up to 12 guests in six cabins. Accommodations will be spread out with four staterooms on the lower deck, a VIP cabin enjoying a prime position on the upper deck, and an owner’s suite forward on the main deck hosting a private gym and balcony connecting the space with the sea.

The Mondomarine M50 Aria would be built in light aluminium alloy and be RINA classed for unrestricted navigation. Powered by twin MTU 16V 2000 M94 engines, she’s expected to have a top speed of 20 knots, cruise at 19 and have a range of 3,500 nautical miles at a more conservative 12 knots.